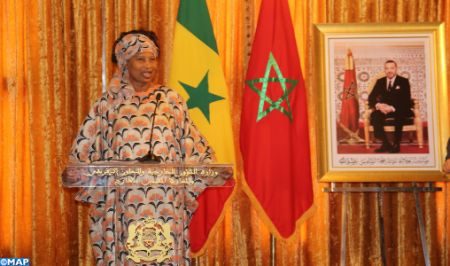 Minister of Foreign Affairs and Senegalese Abroad Aïssata Tall Sall on Monday described the opening of her country’s consulate general in Dakhla as a “living symbol” of the excellence of the age-old relations between Rabat and Dakar.
“This Consulate General will serve to magnify the excellence of our relations”, under the leadership of the two Heads of State, HM King Mohammed VI and the President of the Republic of Senegal, Macky Sall, stressed Senegal’s top diplomat at a joint press briefing with Minister of Foreign Affairs, African Cooperation and Moroccans abroad Nasser Bourita, following the inauguration of the diplomatic representation in Dakhla. The head of Senegalese diplomacy further noted that the opening of her country’s consular representation in the Moroccan Sahara reflects the willingness to go further in strengthening bilateral ties as well as “the ambition that the two states have long nurtured for Africa.” It is a “symbol of what we must bring as ambition to our two countries to move forward in this multifaceted cooperation” which covers the areas of trade, academia, health, and transport, among others, she said. This is also about “adding another stone to the edifice that the elders have built,” the Senegalese FM said, stressing that future generations of Moroccans and Senegalese now feel they must make headway with what has been done. The official also noted that the city of Dakhla embodies “this spirit of openness” that has always characterized Morocco’s policy towards Africa and particularly Senegal. This Consulate General will facilitate access to administrative services for Senegalese living in the region, she said, describing as “timely” the opening of her country’s consular representation in Dakhla. This is the 10th consular representation inaugurated in Dakhla after those of the Gambia, Guinea, Djibouti, Liberia, Burkina Faso, Guinea Bissau, Equatorial Guinea, the Democratic Republic of Congo (DRC) and Haiti.