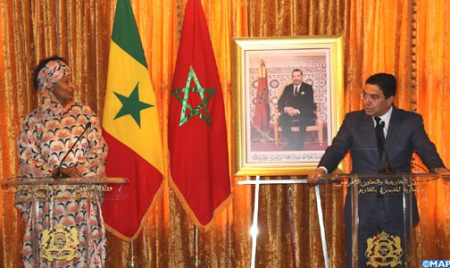 Minister of Foreign Affairs, African Cooperation and Moroccans Abroad Nasser Bourita called, Monday, on the UN Security Council to determine who is responsible for the violation of the ceasefire and the blocking of the political process to find a solution to the conflict over the Moroccan Sahara.
“The Security Council must determine, in all objectivity, who violates the ceasefire on a daily basis and who has proclaimed its end, on the one hand, and on the other, who is committed to this ceasefire (in reference to Morocco) and who announced it at the highest level by HM the King,” said Bourita during a joint press conference with the Minister of Foreign Affairs and Senegalese Expatriates Aïssata Tall Sall, on the occasion of the opening by the Republic of Senegal of a consulate general in Dakhla. The minister insisted that “this confusion must end, for the Security Council and the international community, between the one who is committed to the ceasefire and the one who breaks it, the one who supports the political process and the one who uses maneuvers”. Bourita stressed that Morocco does not oppose the appointment of a UNSG Personal Envoy, noting that the Kingdom has responded favorably to the latest proposal on the matter. “Who is obstructing the process of appointing a Personal Envoy?” He asked. “It is necessary to define the responsibilities, to determine who plays a constructive role, who works seriously and shows clarity in the positions, and who manipulates, maneuvers and contradicts itself through its words and deeds. Who works under the aegis of the United Nations and seeks to involve other organizations, which do not want it, in the UN process,” he noted, considering that ”these contradictions must end”. “If the matter is in the hands of the United Nations, who then tries to involve the African Union in it,” he wondered. “This is a time for clarity. This ambivalence in terms of ceasefire, political process, support for MINURSO and support for UN exclusivity must be addressed by the Security Council”, underlined the minister. Bourita said that anyone who wants to sit down at the table to find a solution within the framework of the autonomy plan is welcome … otherwise he can keep disseminating quibbles and ambivalence, assuring that “Morocco will continue its serious action to reaffirm the Moroccanness of the Sahara on the ground and through diplomacy, and not through delusions and lies”. “If the real party, which is Algeria, shows seriousness, Morocco is then ready, but if it is a question of maneuver and manipulation, the Kingdom will continue its process of reaffirming the Moroccanness of the Sahara”, he said, recalling that the number of consulates general in the southern provinces stands at 21. The minister also noted the opening of two other consulates in these provinces, which confirms that “the Moroccanness of the Sahara is an ongoing and irreversible process,” he insisted. Bourita said that Morocco considers that what has been achieved, under the leadership of HM King Mohammed VI, on the diplomatic level and on the ground are “accomplishments that must be invested in finding a solution, and that is for this reason that the Kingdom has worked for the resolution of this conflict within the sole framework of the autonomy plan”.