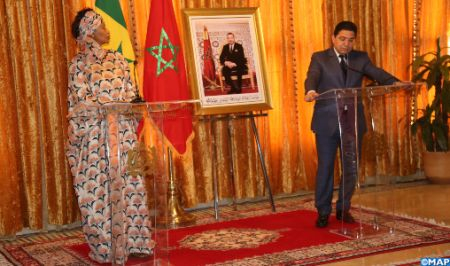 The opening of a consulate general of the Republic of Senegal in Dakhla is the actualization of the will of the two Heads of State, HM King Mohammed VI and HE Macky Sall, said, on Monday in Dakhla, Minister of Foreign Affairs, African Cooperation and Moroccans Abroad Nasser Bourita.
“It is in this spirit that His Excellency the President of the Republic of Senegal Macky Sall told HM the King in a telephone conversation on March 21, 2021 of his wish to open a diplomatic representation of Senegal in Dakhla”, with a view to strengthening bilateral relations, the minister stressed. Bourita, who was speaking at a joint press briefing with Minister of Foreign Affairs and Senegalese Expatriates Aïssata Tall Sall, after the inauguration of the Senegalese consulate in Dakhla, noted that the opening of this diplomatic representation is an additional proof via acts of the unwavering alliance between Morocco and Senegal and their active, unfailing solidarity. “The opening of a consulate is never a trivial act in relations between states,” he insisted, explaining that this sovereign decision of Senegal reflects the very old history of the friendship between our two countries, confirms the Moroccanness of the Sahara and testifies, once again, to the steadfast position of the firm support of the brotherly country of Senegal for the territorial integrity of the Kingdom. The Moroccanness of the Sahara is a historical, political and legal truth which is not subject to negotiation, he insisted. He also said that this consulate “is more than an administrative facility. It is a new link between Morocco and Senegal”, adding that this diplomatic representation will operate in the field of territorial and decentralized cooperation, focused on Africa, which is in full development in the southern provinces of the Kingdom. Bourita highlighted on this occasion the solid bonds of friendship and brotherhood that exist between the leaders of the two countries, HM King Mohammed VI and the President of the Republic of Senegal, HE Macky Sall, noting that “the Senegalese and Moroccan peoples represent a single people, one represents the natural extension of the other and that their depth and exemplary aspect exceed all superlatives”. The Minister of Foreign Affairs, African Cooperation and Moroccans Abroad also emphasized the strategic partnership of excellence which HM the King personally oversees. Morocco and Senegal are linked by more than a hundred agreements covering key sectors in terms of political consultation, and economic, cultural and security cooperation, among others, hence the need to cooperate more to bring this partnership up to the level of the ambitions of the two Heads of State, he said. Bourita called in this context to implement important provisions, namely the reviving of the economic impetus group, which was set up on the occasion of HM the King’s visit to Senegal in 2016 and the strengthening of training as a key element between the two countries. So far, there are 170 scholarships, he said, noting that it has been agreed to increase them to 250 scholarships, with 80 additional allocations to be devoted to vocational training in Laayoune and Dakhla. “We have agreed to increase the number of sectoral visits and make it possible to identify actions, projects and cooperation in the various fields,” he said. The minister said that it was agreed to strengthen political consultation between the two ministries on all regional and international issues, to push the impetus groups to a logic of win-win cooperation.  “The legal framework is greatly enriched, we have more than a hundred agreements covering all areas, in addition to three other agreements signed today in the area of ??decentralization and in the fields of information technology and communication and civil aviation,” he said, stressing the need to ensure the implementation of these agreements and to update them. “Our ambition is the same so that this relationship remains the unparalleled model of the intra-African relationship, of the South-South relation between two countries united by several centuries of strong human relations,” he added. In addition, Bourita recalled that the Sovereign sent a message of congratulations to the President of the Republic of Senegal Macky Sall, on the occasion of his country’s independence day, in which HM the King underlined “His firm will to pursue joint action, with a view to strengthening the Moroccan-Senegalese strategic partnership and contributing to the building of a united, solidarity-based and prosperous Africa”. He also noted that HM the King paid no less than eight official visits to Senegal, including the historic one of November 2016, during which the Sovereign had delivered His first and only speech of the Green March outside Morocco in which His Majesty the King indicated that “This country which is so dear to us, has always been at the forefront of the defenders of the territorial integrity and the higher interests of the Kingdom. Even more, it has demonstrated, by deeds and words, on many occasions, that it considers the question of the Moroccan Sahara as its own national cause”. The inauguration ceremony of the Consulate General of Senegal, the 10th diplomatic representation to open in Dakhla for a little over a year, took place notably in the presence of the Ambassador Director General of the Moroccan International Cooperation Agency (AMCI) Mohamed Methqal, the Wali of the Dakhla-Oued Eddahab region, governor of the province of Oued Eddahab, Lamine Benomar and the president of the Regional Council, El Khattat Yanja, as well as local elected officials and other civil and military figures. Since the beginning of last year, the city of Dakhla has experienced a strong diplomatic dynamic with the inauguration of the consulates of Gambia, Guinea, Republic of Djibouti, Republic of Liberia, Burkina Faso, Republic of Guinea Bissau, Republic of Equatorial Guinea and Democratic Republic of Congo (DRC), in addition to Republic of Haiti.