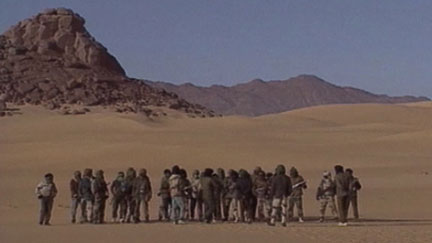 The breaking up by the Moroccan security services  of a terrorist unit which one of its members belongs to the AQMI groups, reflects the development of the situation which gravity represents perhaps a turning point in the struggle against terrorism in Morocco.
The danger resides in the importance of the broken-up unit which counts 27 members, but especially in the arsenal of weapons and explosives discovered for the first time in the Western Sahara, in Amgala. A village located some 200 km in the East of Laayoune. This backs up further the track of porous relationships between AQMI, the Polisario and the network of all kinds of traffic in the Sahelo-Sahara strip. The arrest in December 2010, by the Mauritanian army and the Malian security forces, of twenty arms and drugs traffickers, almost all of them from the Polisario Front, confirms this harmful connivance.

Till now confined in the desert vastness of Mauritania, Mali and the South of Algeria, AQMI seems to have decided to move its activities towards the West. Moreover, the broken up unit led by a Moroccan known for having been in the Al Qaida camps in the North of Mali. The broken up unit was planning terrorist operations, using booby-trapped cars and explosive belts. To reach its goal, this unit was planning to send to Morocco some volunteers trained in AQMI camps in Algeria and Mali.
Many international experts underlined that the continuing of this Western Sahara conflict encourages this regional situation favorable to the proliferation of terrorism and arms and drugs traffic.