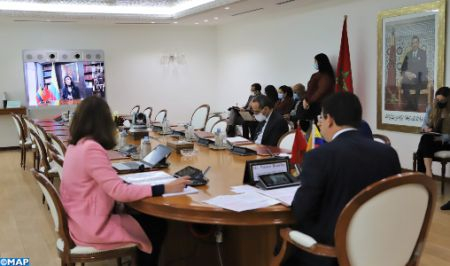 The Foreign Affairs Minister of the Republic of Colombia Claudia Blum, stressed, on Tuesday, the importance of the Moroccan autonomy initiative, in order to reach a political, realistic, and lasting solution which is based on the compromise by all parties, with a view to putting an end to the Sahara issue, which is vital for Morocco, within the framework of its sovereignty and territorial integrity.

Blum highlighted the serious efforts made by the Kingdom of Morocco in the search for a political, pragmatic, realistic and lasting solution to this dispute, within the framework of the political process led under the UN exclusive auspices, in accordance with the various resolutions of the UN Security Council, said a joint statement issued after a teleconference between Blum and Minister of Foreign Affairs, African Cooperation and Moroccans Abroad Nasser Bourita.

During this teleconference, the two officials exchanged viewpoints on the strategic and exemplary relations uniting the two countries and examined the new prospects linked to the bilateral partnership.