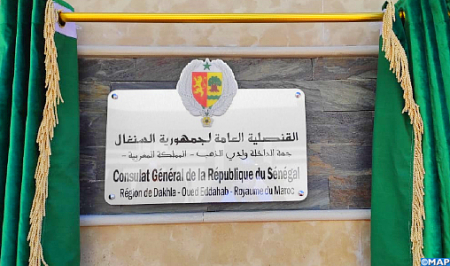 Dakar – The opening of the Senegalese Consulate General in Dakhla, a city located in southern Morocco, confirms Dakar’s support for the Morocanness of Sahara, Senegalese News Agency (APS) reported on Tuesday, quoting a Consular official in Morocco. ”The opening of this consulate confirms Senegal’s supports for the Morocanness of the Sahara”, and that the region “belongs to Morocco”, Pierre Andre Sene said, on the sidelines of the inauguration Monday by Minister of Foreign Affairs and Senegalese abroad, Aïssata Tall Sall, and Minister of Foreign Affairs, African Cooperation and Moroccans Abroad Nasser Bourita, of the Senegalese consular representation in Dakhla. On this occasion, APS recalled that ”the city of Dakhla is 2,000 kilometers from Casablanca, where the nearest Senegalese consulate was located”, stressing that around 2,000 to 3,000 Senegalese are currently living in the city of Dakhla. According to Sene, Senegalese in the southern region work in the informal sector, where some of them are employed in local industries, including hotels. “It is a city of the future. Several investments have been made by Moroccan authorities. It is a city of transit,” he explained, noting that the new consulate will enable Senegalese to obtain administrative papers without having to go to Casablanca or Rabat.