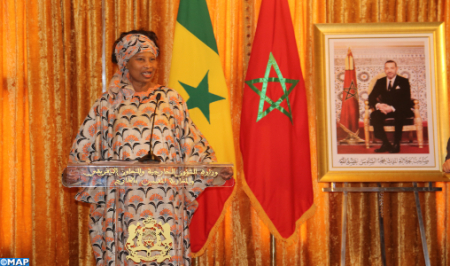 Rabat – Minister of Foreign Affairs and Senegalese abroad Aïssata Tall Sall, described Tuesday the Moroccan experience in terms of management of dry, arid and desert areas, as “important for the Great Green Wall project” in the Sahel. “The experience of Morocco could be extremely important for the construction of the Great Green Wall,” Tall Sall said at a press briefing in Rabat following a working session with Speaker of the House of Representatives, Habib El Malki. “Dakar will host the World Water Forum next year. Water questions are at the center of our interests,” she added, noting that sustainable development issues were also on the agenda of her meeting with the Moroccan official. For his part, El Malki welcomed the constant support of Senegal for the territorial integrity of the Kingdom, witnessed by the opening of a consulate in Dakhla. “The opening of Senegal Consulate General in Dakhla demonstrates the depth and strength of the relations between the two countries,” he said. “The relations between the two countries are not classic, but exceptional and strategic ones,” he stressed, recalling that Morocco and Senegal share a common history and have worked together for the unity of the African continent. He highlighted the complementarity of the positions of the two countries on questions, including water scarcity due to climate change. Regarding women’s representation in parliament, El Malki said that electoral laws should promote it within the Houses of Representatives and Advisors.