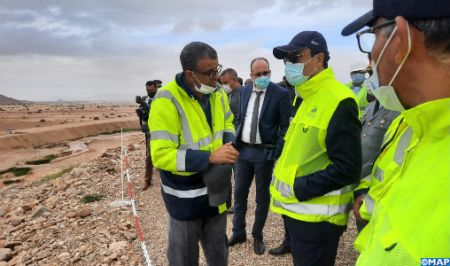 The Fask dam project near Guelmim – the largest in Morocco’s Southern Provinces – will have “very important” social and economic benefits for the region of Guelmim-Oued Noun, said on Wednesday Minister of Equipment, Transport, Logistics and Water, Abdelkader Amara. This project, whose construction works began in 2018 for an estimated amount of 1.5 billion dirhams, is regarded as a “very special” infrastructure from the technical point of view, said the minister during a visit to the construction site of this project located in the Fask commune. With a reservoir of 80 million cubic meters, the dam will help protect Guelmim against flooding and irrigate 10 to 20 thousand hectares of land, he said, highlighting the positive impact of this type of project on tourism in the region.

According to Abdelkarim Ait Ehdad, who is in charge of the development of the Fask dam, the progress rate of this project reached 43%. For her part, President of the Regional Council of Guelmim-Oued Noun Mbarka Bouaida recalled that the Fask Dam and the Tiznit-Dakhla expressway projects are among Morocco’s strategic sites, under the integrated development program of the region, signed before HM King Mohammed VI in the city of Dakhla in 2016.