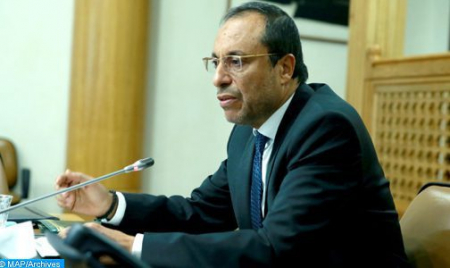 The progress rate of the Tiznit-Dakhla expressway works has reached 43%, Minister of Equipment, Transport, Logistics and Water, Abdelkader Amara said on Tuesday in Tiznit. In a press statement, on the sidelines of a visit to the N1 national road site at the Tiznit-Dakhla section, Amara stressed that this mega project is related to the construction of the Tiznit-Laâyoune expressway, the reinforcement and widening of the N1 national road by 9 meters between Laâyoune and Dakhla as well as the construction of 16 structures. Works on the section between Tiznit and Laâyoune reached 46%, he said, noting that the construction of more than 480 km will be completed before the end of the current year. He added that the rate of progress of the widening of the national road between Laâyoune and Dakhla exceeded 90% while the implementation of 16 structures reached 13%, stressing that the call for tenders relating to the construction of a bridge (1650 meters) at the bypass of the city of Laâyoune will be launched at the beginning of May. The Tiznit-Dakhla expressway, about which a partnership agreement was signed before HM King Mohammed VI in Laâyoune in 2015, on the occasion of the commemoration of the 40th anniversary of the Green March, is part of the new development model in the southern provinces of the Kingdom. This large-scale project, which extends over 1,055 km and which is worth around 10 billion MAD, constitutes a structuring lever for the economic and social development of the southern provinces of the Kingdom.