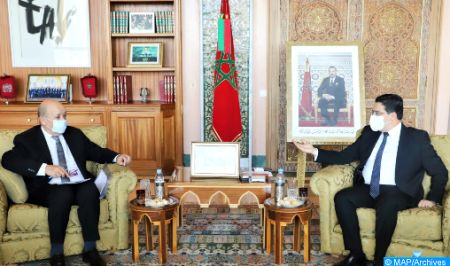 Paris – The French Minister for Europe and Foreign Affairs Jean Yves Le Drian lauded, on Thursday, the quality of security cooperation between France and Morocco. He also reiterated his country’s position in support of the Moroccan autonomy plan for the Sahara. The French Minister for Europe and Foreign Affairs had a teleconference meeting, on Thursday, with his Moroccan counterpart Nasser Bourita, during which he discussed the very rich bilateral relations between France and Morocco and their shared issues, in particular the consequences of the health crisis, the coordination between the two countries to deal with it as well as migration issues, said the spokesperson for the Quai d’Orsay (foreign affairs ministry). The French official praised, on this occasion, “the quality of security cooperation between our two countries that we regularly have the opportunity to observe, especially in the fight against terrorism,” said the spokesperson during the electronic press briefing. Regarding the situation in the Sahara, “the Minister recalled France’s support for the search for a just, lasting and mutually acceptable political solution, in accordance with the resolutions of the United Nations Security Council. He recalled that, in this perspective, France considers the Moroccan autonomy plan as a serious and credible basis,” the spokesperson said. “The minister called for the rapid appointment of a new UNSG Personal Envoy,” she added. At the regional level, the French top official welcomed the recent political advances in Libya and reiterated his support for the United Nations process which should lead to the organization of the elections of December 24, 2021 and, in terms of security, to the withdrawal of all mercenaries and foreign fighters, the same source said. On the Sahel, the French Minister for Europe and Foreign Affairs welcomed the participation of the Moroccan head of government, Saad Eddine El Otmani, in the conference of heads of state of the G5 Sahel and in the N’Djamena Summit, as well that the participation of Nasser Bourita in the ministerial conference of the Coalition for the Sahel. He also recalled the initiatives undertaken by France in this context. Finally, “the minister welcomed the new dynamic in the relationship between Morocco and the European Union and reaffirmed Morocco’s strategic role as a partner of the Union,” said the spokesperson.