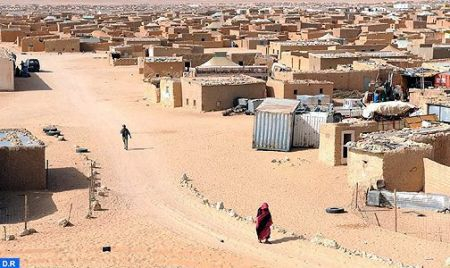 Dakar – Senegalese websites raised, on Thursday, the issue of two young Sahrawis who were burned alive by Algerian soldiers, in October 2020, in Tindouf, recalling the reaction of the Office of the UN High Commissioner for Human Rights (OHCHR) denouncing “systematic violations committed by the Algerian security forces” against the Saharawis in the Tindouf camps. The two Sahrawis of the Tindouf camps named Moha Ould Hamdi Ould Suelem and Ali Idrissi were burned alive and in cold blood in a pit by members of an Algerian military patrol, in Tindouf south of Algeria, said the portal “lerepublicain.sn”. The two young Sahrawis, who were looking for gold in a mine, hid in a pit to protect themselves from the gunfire aimed at them. Faced with their refusal to comply, for fear of being killed, elements of the Algerian army did not hesitate to set the pit on fire and burn alive the two young Sahrawi gold miners. Faced with the inaction of the Algerian authorities regarding this incident, which took place on its territory, three special rapporteurs of the OHCHR urged, in a letter, the Algerian government to elucidate the circumstances of this case of extrajudicial execution, underlined the website. In their joint letter, the OHCHR special rapporteurs called on Algeria to investigate the human rights abuses in the Tindouf camps, in general, and in particular, on the said incident, recalling that all the deaths concerning migrants and refugees, engaging the responsibility of the State, must be the subject of rigorous investigations. The letter from the special rapporteurs confirms the responsibility of the Algerian authorities, so demanded by several NGOs in charge of the defense of human rights, for the atrocities committed against the Sahrawi refugees in Tindouf, south of Algeria, noted “the republican.sn”. The OHCHR criticized the Algerian regime in the case of the assassination of two Saharawi gold miners, burned alive on October 20, 2020, wrote , for its part, the information site “SENEGO”, stressing that the UN body denounced “the systematic violations committed by the Algerian security forces” against the Sahrawis in the Tindouf camps. A letter sent, on January 7, 2021, by the special rapporteurs of the OHCHR to the Algerian government, reaffirms the main accusations made by the families of the victims against the Algerian authorities, and condemns these abuses, it said. “Algeria must investigate the abuses and violations of human rights in the Tindouf camps, because the alleged abuses took place on Algerian territory and therefore fall under its territorial jurisdiction”, underlined “SENEGO”.