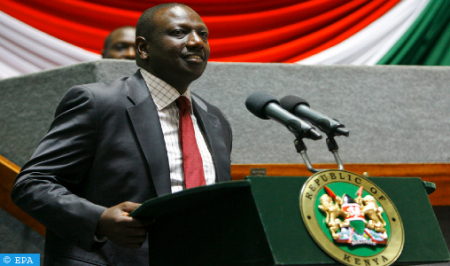 Nairobi – Kenya’s second-largest daily newspaper “The Star” echoed on Friday the statement of Vice President William Ruto, who described Morocco’s autonomy plan for its Southern Provinces as “the best solution to the Sahara issue.” The newspaper points out that Ruto made this statement during recent talks with Morocco’s ambassador to Kenya, El Mokhtar Ghambou. The official noted that his country “should never give up its neutrality and should rather work directly with the UN to support the peace process on the Sahara issue,” the daily says. “As a non-permanent member of the Security Council, it is in Kenya’s interest to support the UN peace process on the Sahara issue,” Ruto said, adding that Kenya “does not need to cause unnecessary tension and division within the African Union.” Quoted by the newspaper, the Kenyan VP also stressed that cooperation between Kenya and Morocco, which are leading powers in their respective regions, will benefit the entire continent. In that regard, “The Star” recalls the statement made by Raila Odinga, High Representative of the African Union for Infrastructure Development and Chairman of Kenya’s “Orange Democratic Movement” party (ODM), who said he was “impressed” by the development in several industrial sectors in Morocco and described the Kingdom as “a reference of development for Kenya and all of Africa.” Odinga stated that he was also “impressed” by the Moroccan industry, including the automotive sector, which will contribute to accelerating intra-African trade and ensure the autonomy of Africa, according to the newspaper. Since its return to the African Union in 2017, 30 years after its exit, Morocco has stepped up its activities on the diplomatic, economic and security fronts in the continent, and Kenya has not been left behind, the newspaper writes. In September 2016, the two countries had reaffirmed their commitment to strengthen bilateral relations, strategic cooperation and mutual respect, recalls “The Star”, adding that trade between the two countries had reached nearly 21 million dollars in 2019.