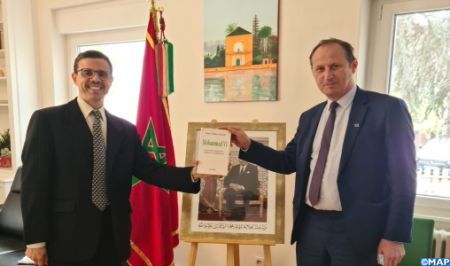 Strasbourg – Bruno Fuchs, deputy for the 6th district of Haut Rhin and member of the Foreign Affairs Committee at the National Assembly, called for a solution to the Sahara issue within the framework of the autonomy plan proposed by Morocco. During a meeting with the Consul of Morocco in Strasbourg Driss El Kaissi, the French deputy reacted to the latest developments in the Sahara issue, describing the American recognition of the Kingdom’s full sovereignty over its Saharan provinces as “a good proposal which is quite close to the plan proposed by France”. Bruno Fuchs also called for finding a solution with a Sahara that is “integrated into Morocco in accordance with the autonomy plan proposed by the Kingdom”. The parliamentarian of the Democratic Party (MoDem) also hailed “Morocco’s strong will to create a strong Maghreb integrating the countries concerned and going beyond all disputes”, highlighting “the African vocation of the Kingdom, its south-south policy and the role of link that the Kingdom plays between Africa and Europe”. In terms of geostrategy, the French deputy welcomed the frequent tours of HM King Mohammed VI in Africa accompanied by delegations of Moroccan businessmen which contribute, according to him, to “the consolidation of Morocco’s relations with its southern neighborhood”. He affirmed on the same occasion that Morocco represents a “great success at the human, economic and geostrategic levels”.