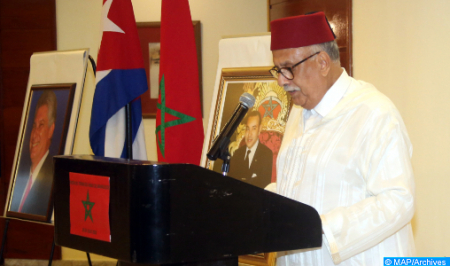 Madrid – The separatist attempts and maneuvers of the polisario are going from failure to failure, while Morocco’s cause and autonomy proposal for its Southern Provinces enjoy legitimacy and growing support for its realistic approach to end the artificial conflict over its territorial integrity, according to Morocco’s ambassador in Havana, Boughaleb El Attar. In an interview with Spanish magazine “Atalayar”, the diplomat noted that the polisario maneuvers are “constantly going from failure to failure. The latest was in New Zealand, where it tried to suspend the trade agreements that the country has with Morocco concerning the purchase of phosphates.” “The court rejected the complaint that sought to freeze the New Zealand Sovereign Wealth Funds invested in it, declaring that these financial operations are legal,” he said. “The EU has continued to defend the legality of the agricultural and fisheries agreements with the Kingdom of Morocco. Direct and indirect investments continue to flow to the southern provinces, not only from the US, France and other EU countries but even from Russia, as reflected in the latest fisheries agreement signed with that country,” El Attar stated. According to the diplomat, the Cuban government sincerely wants this artificial dispute to be resolved within the framework of the UN-led process. El Attar noted that since his appointment as ambassador to Cuba, he has constantly explained to the Cuban authorities that the only realistic solution is the advanced autonomy proposal that will allow the Saharan populations to fully exercise all their political, economic and social rights, while maintaining national sovereignty and the territorial unity of the Kingdom. The diplomat also highlighted the visionary policy of HM the King based on South-South cooperation and promoting sustainable development with Africa’s countries, saying that the opening of foreign diplomatic representations in the southern provinces is an expression of firm solidarity with Morocco and support for its just position. On the situation in El Guerguarat, El Attar highlighted the firmness of the Kingdom’s action to restore the free movement of people and goods as part of a peaceful operation, which has been welcomed and supported by the international community. However, he deplored, “the separatists persist in their provocation by continuing their so-called war” against Morocco. On Morocco’s management of the Covid-19 health crisis, El Attar noted that from the outset, Morocco, under HM King Mohammed VI leadership, took the COVID-19 pandemic very seriously and ordered strict border closures and restrictions. Speaking of Morocco-Cuba relations, the diplomat underlined that after 37 years of diplomatic rupture, they are improving considerably in all areas thanks to the common will to move forward.