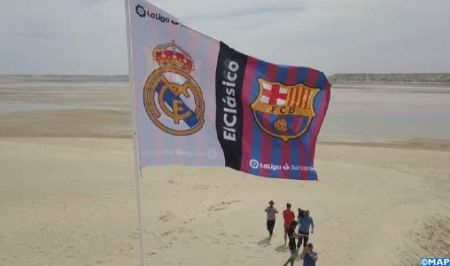 A promotional video footage, highlighting the tourist assets and natural potential of the Dakhla-Oued Eddahab region, was recently made by representatives of the Spanish La Liga to broadcast a few days before and during the “clasico”, scheduled this weekend. In this context, La Liga, in collaboration with the Regional Council of Tourism (CRT) of Dakhla Oued-Eddahab has opted for the pearl of the South as a flagship destination to film this promotional video footage that will be broadcast worldwide a few days before and during this clasico between Real Madrid and FC Barcelona. The flags of both clubs were raised on the famous “White Dune”, an imposing dune of white sand in the middle of the lagoon, about thirty kilometers from Dakhla and other nearby sites. According to the organizers, the purpose of this communication action is to promote the “clasico” and to give worldwide visibility to the different cities where La Liga has raised the flags of the two star clubs. The Spanish La Liga has launched a global communication campaign to position the “clasico” as the most anticipated entertainment show and promote it in the most exotic and spectacular places in the world. The city of Dakhla is one of 27 cities in the world that have been chosen to film this promotional video, to be broadcast on various sports channels worldwide.