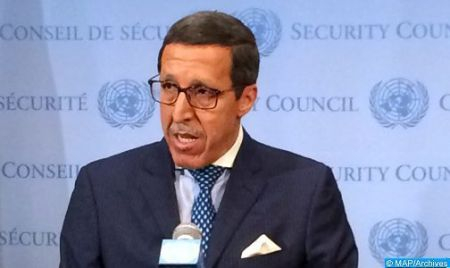 In a letter addressed to the members of the UN Security Council Morocco’s Representative to the UN Ambassador Omar Hilale exposed the obstructions, blockages, and procrastinations of Algeria and the “polisario” regarding the appointment of a Personal Envoy of the Secretary-General and the resumption of the UN political process. In this letter sent to the UNSC members on the eve of consultations on the Moroccan Sahara issue, scheduled for April 21, Hilale stressed that Morocco promptly accepted the proposals of the UN Secretary-General for the appointment, first, of former Romanian Prime Minister Petre Roman, in December 2020, and subsequently of former Portuguese Foreign Minister Luis Amado, last month, as Personal Envoy for the Moroccan Sahara. “Through its positive and diligent responses to these proposals, Morocco confirms once more its commitment to supporting the exclusive efforts of the UN to resolve this dispute, as well as its respect for the resolutions of the Security Council,” said the Moroccan diplomat. “In contrast, Algeria and the “polisario” continue blocking the UN political process. In less than three months, they have refused the two proposed appointments of Petre Roman and Luis Amado. This is a flagrant violation of resolution 2548, which called for the appointment of a ‘new Personal Envoy as soon as possible,” he added. “This obstruction is an insult to the authority of the Secretary-General and a disdain for the resolutions of the Security Council. It exposes the double talk of Algeria and the polisario. On the one hand, they call, in public and at the highest level, for the appointment of a Personal Envoy and the resumption of the political process, even daring to criticize the Secretary-General for the absence of an Envoy. On the other hand, they reject all qualified candidates of international stature proposed by the Secretary-General,” Hilale wrote. “Algeria and the ‘polisario’ will have to shoulder the full responsibility for highjacking the political process, so much requested by the Security Council,” he added. Ambassador Hilale also recalled that HM King Mohammed VI reaffirmed to the UN Secretary-General – during their telephone conversation of November 16, 2020- that Morocco will continue supporting the UN-led efforts within the framework of the political process, which should involve the real parties. “Algeria is the main party that has created and is mobilizing all means to perpetuate this dispute. It must assume its responsibilities by contributing fully to the round-table process, as enshrined in the Security Council resolutions 2440, 2468, 2494 and 2548 to achieve a political realistic, pragmatic, sustainable, and compromise-based solution to the Moroccan Sahara issue,” he insisted. “The autonomy initiative, within the framework of Morocco’s sovereignty and territorial integrity — the pre-eminence, seriousness and credibility of which have been enshrined in the 17 resolutions of the Security Council since its presentation in 2007– is and will remain the only solution to this dispute,” Hilale concluded.