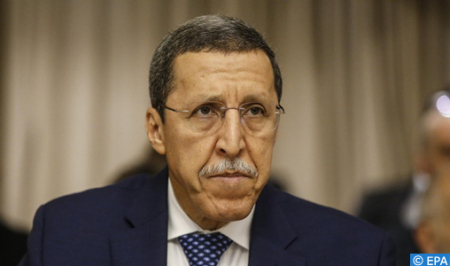 In his letter to the 15 members of the Security Council ahead of the Council’s consultations on the Moroccan Sahara, scheduled for Wednesday, the Permanent Representative of Morocco to the UN, Ambassador Omar Hilale, decried the media campaign of Algeria and the Polisario claiming the existence of an alleged armed conflict in the Moroccan Sahara, affirming that these are pure lies and a falsification of the reality on the ground. This propaganda aims to mislead both the international community and the populations in captivity in the Tindouf camps in Algeria. It is denied not only by the daily reports of MINURSO, but also by the international press, said Hilale. In this letter, the diplomat clarified that “the Moroccan Sahara is experiencing an unprecedented developmental boom, which makes it one of the most advanced regions in terms of human development indicators, not only in Morocco, but in the whole North African region and beyond”. He added that the populations of the Moroccan Sahara live in peace and fully enjoy their civil, political, economic, social and cultural rights. They contribute, in the same way as the populations of the other regions of the Kingdom, to the democratic march and socio-economic development of Morocco. On the peaceful action of the Royal Armed Forces in El Guergarate, following its illegal blockade by the armed militias of the “Polisario” for more than three weeks, the Moroccan diplomat recalled that it helped restore definitively, since the 13th of November 2020, the free movement of people and goods in this road passage. He specified that this non-offensive action took place in the day and in the presence of MINURSO, which affirmed the absence of any victim or slightest attack on civilians”, noting that Morocco’s action was “highly lauded by the populations of the Moroccan Sahara as well as by the international community”. Hilale also reaffirmed Morocco’s full respect and commitment to the ceasefire provisions, under the supervision of the MINURSO. “This responsible position of the Kingdom was reaffirmed by HM King Mohammed VI, to the Secretary-General of the United Nations Antonio Guterres, during their telephone conversation on November 16, 2020,” said the ambassador, adding that the Sovereign also underlined that “Morocco is firmly determined to react with force, within the framework of self-defense, to any threat to its security and the peace of mind of its citizens”. The Moroccan diplomat also said that the announcement by the “polisario”, encouraged by Algeria, of its renunciation of the ceasefire, is a serious violation of the resolutions of the Security Council and an insult to this UN body, guarantor of the ceasefire. It constitutes a threat to regional peace and stability, already accentuated by the connivance between the “Polisario” and terrorist groups in the Sahel-Saharan region. The “Polisario” will fully assume the consequences of its destabilizing actions in the north-African region and beyond, he warned. In addition, Hilale informed the UN body that “Morocco is continuing its active cooperation and support for MINURSO in the implementation of its ceasefire supervision mandate”. He affirmed, in this context, that the members of MINURSO were included in the vaccination campaign against COVID-19 and vaccinated in the same way as Moroccan citizens. He brought to the attention of the Security Council, the drastic restrictions on the freedom of movement of MINURSO and its supply, by the “polisario”, with the complicity of Algeria, which completely hinders its mandate to supervise the ceasefire. Hilale warned the members of the Security Council of the catastrophic lawless situation prevailing in the Tindouf camps in Algeria. The populations held captive in the camps of Tindouf undergo extremely serious violations, by the “Polisario”, of their most elementary human rights, which amplified since the renunciation by this armed group of the cease-fire, he deplored. In this context, he denounced “the compulsory enlistment of children in Tindouf camps by armed militias of the “polisario” which constitutes one of the worst violations of human rights”, stressing that this practice deprives these children of all their rights, in particular to education and family life.