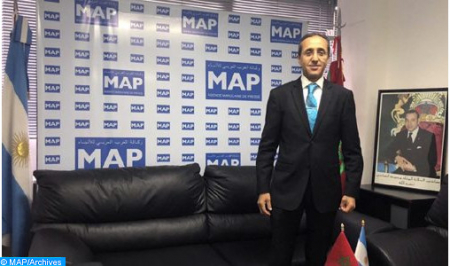 The potential for the development of trade between Morocco and Argentina is very important, particularly in the agro-industrial sector, said the Moroccan ambassador in Buenos Aires, Yassir Fares. The diplomat, who was the guest of a local radio station, said that trade between the two countries ($ 600 million) remains modest compared to the potentialities abound by the two countries and does not reach the level of the excellence of bilateral political and cultural relations between Argentina and the Kingdom. As an example of this potential, the Argentinian agro-industrial sector, which constitutes the heart of the economy, could be very interested in the new generation of fertilizers developed by Morocco thanks to its great richness in phosphates, as it is the largest exporter in the world. This new generation of fertilizers used in agriculture is eco-friendly, the ambassador pointed out. The second sector with high potential for bilateral trade is that of components used in the car industry, the ambassador noted, recalling that Morocco is a major producer of these components. The Kingdom, the diplomat said, has installed two major poles of the car industry, respectively in Tangier and Kenitra, which make it a major producer of vehicles and components necessary for the car and aeronautic industries.

Argentina’s technology sector also offers huge opportunities to develop exchanges between the two countries, the ambassador said, while announcing the extension for five years of a cooperation agreement between scientific research institutes in the two countries. The diplomat also mentioned other sectors that could be developed further, including tourism. Morocco and Latin America, in general, share a common cultural and linguistic legacy, the ambassador underlined. “This legacy, he said, brings us closer to the Latin American world”. For Argentina, and Latin America in general, Morocco is a gateway to Africa, thanks to its experience and its commitment to cooperation with African countries. Asked about the latest developments in the Sahara issue, Fares underlined the diplomatic victories recently won by Morocco, in particular the several openings of consulates of friendly countries in the Sahara, which constitute strong signals of the recognition of the sovereignty of Morocco over its Sahara.

The ambassador also recalled the last meeting of the Security Council which called for a political solution based on the Moroccan autonomy proposal. The Moroccan diplomat also stressed the impressive development effort made by Morocco in the southern provinces, which will turn into regional economic hubs between northern Africa and the rest of the continent.