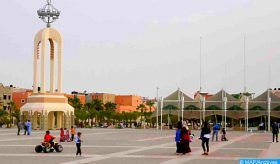 Moroccan ambassador to Poland, Abderrahim Atmoun, and Polish economic operators held, on Monday in Warsaw, a meeting focusing on investment in the fisheries sector in the southern provinces of the Kingdom. The Polish officials include Krzysztof Stanuch, president of “Baltic Net”, a company specializing in the production and repair of fishing equipment, and Boguslaw Szemioth, president of the North Atlantic Producers Council, a unit specializing in fishing and fish preparations. Both parties discussed during this meeting the fisheries sector in Morocco and particularly in the southern provinces, said a statement by the embassy. The two representatives of the Polish maritime sector have shown a strong interest in developing cooperation projects with Morocco, added the same source. In this regard, the president of the company Baltic Net, said he had contacts with the cooperative “Dakhla Trawls” to organize training workshops for fishermen of the cooperative as part of development projects of the port and the region of Dakhla. He also expressed the wish to travel to Morocco to meet the director of the regional investment center in the region of Dakhla to concretize this cooperation project and identify other business opportunities in the region in the fisheries and aquaculture sector, stressed the same source.