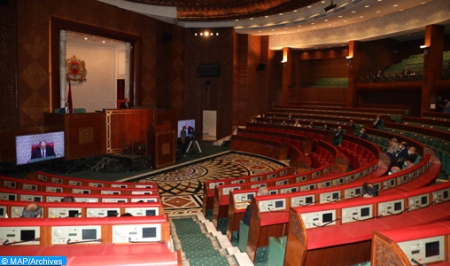 Rabat – Members of the Committee of Foreign Affairs, National Defense and Moroccans Abroad at the House of Advisers (upper house) on Tuesday called on the Spanish judicial authorities to interact positively with the complaints filed by several victims against the leader of the separatists of the “polisario”, the so-called Brahim Ghali, and to initiate the arrest procedure against him. In a statement issued at the end of an emergency meeting dedicated to the developments of the Sahara issue, the Committee deplores, on behalf of all its members, the attitude of Spain, which welcomes on its territory the leader of the separatist militias of the “polisario”, prosecuted for war crimes and serious human rights violations. In this regard, the members of the Committee reiterated their unwavering support for the strong stance of Moroccan diplomacy in the face of this dangerous development, welcoming its approach characterized by consistency and clarity, as strategic choices adopted by the Kingdom, under the leadership of His Majesty King Mohammed VI. The Committee also voiced its commitment to supporting the just cause of territorial integrity as well as the advocacy and efforts made by the Kingdom in the various international fora, in particular through parliamentary diplomacy, highlighting the positive developments of the national cause at the international level, particularly at the Security Council. The Committee also underscored the importance of the new development model and the opening by several countries of consulates in the southern provinces of the Kingdom, which demonstrates that the international community is confident in the legitimacy of the national cause and the autonomy initiative as a serious and credible solution to this conflict. The members of the Committee commended Moroccans living abroad for their sacrifices and resistance to provocations and maneuvers by enemies of the territorial integrity of the Kingdom, and underlined the need to ensure the good implementation of systems of privileges and diplomatic immunity as stipulated by the Vienna Convention, in particular with regard to judicial protection of the diplomatic and consular missions of the Kingdom abroad against acts of sabotage and aggression.