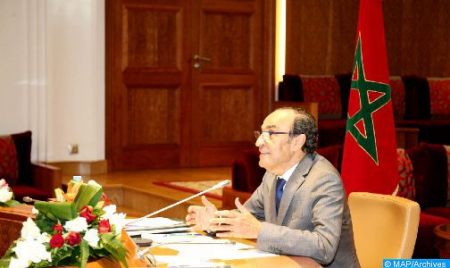 Rabat – The Speaker of the House of Representatives (lower house), Habib El Malki, has highlighted the important role that parliamentary diplomacy plays in promoting relations between Morocco and the Republic of Sao Tome and Principle. El Malki, who held talks Tuesday in Rabat with the Speaker of the National Assembly of Sao Tome and Principe, Delfim Santiago Das Neves, welcomed cooperation between the two legislative institutions, in particular following the signing of a memorandum of cooperation between the two sides in 2019. During this meeting, the Moroccan official welcomed the unwavering support of the Republic of Sao Tome and Principe to the issue of the national integrity of the Kingdom, said the House of Representatives in a release. The Moroccan people are very grateful for the unwavering position of Sao Tome and Principe in support of the Moroccanness of the Sahara, a position which was reiterated last year by the opening of a consulate general in Laayoune, El Malki pointed out. Relations between the two countries are based on solid foundations and are marked by friendship and solidarity at all levels and in various circumstances, he stressed, recalling that HM King Mohammed VI decided, during the spread of the coronavirus pandemic, to deliver aid and medical equipment to several African countries, “thus confirming that Morocco is always at the side of its brothers in times of distress and crises”. For his part, the Speaker of the National Assembly of Sao Tome and Principe reiterated his country’s support for the territorial integrity of the Kingdom, adding that his visit to the Kingdom is part of the consolidation of cooperation between the two countries in general, and between the two legislative institutions in particular. Das Neves expressed, on this occasion, the thanks of his country for the help provided by the Kingdom in order to deal with the coronavirus pandemic. “We consider Morocco as a model and a link between Europe, Africa and the Arab world, and we are proud of the strengthening of solidarity between our two countries,” he stressed. The Speaker of the National Assembly of Sao Tome and Principe announced the establishment of a parliamentary friendship group between the two countries, expressing the desire to strengthen bilateral parliamentary cooperation and consolidate consultation and coordination on various issues of common interest.