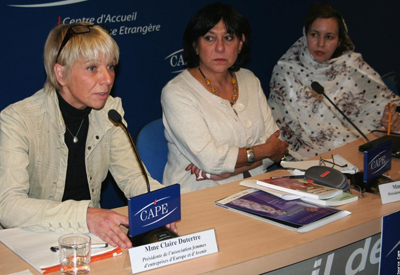 Sahrawi women and chidren’s degrading conditions in Tindouf camps under Polisario control, continue arousing the interest of NGOs dedicated to defend human rights. The case of this vulnerable fringe of the Sahrawi population, was dealt with on Friday 14th March, during a panel organized by the NGO “Ocaproce International” at the Nations palace in Geneva. This meeting has been initiated within the frame of the 16th session of the UN Human Rights Council, on the theme “the situation of women and children in the conflicts”. In his intervention, the president of the Association of business women in Laayoune (AMFED), Hajbouha Zoubeir has denounced, with evidences, the deplorable conditions of women in Tindouf camps. The latter, has she stated, are regularly submitted to forced sessions of indoctrination and are victims of exclusion, enslavement and recurring sexual aggressions.
The AMFED President has pleaded before the audience so that the Sahrawi women in Tindouf can enjoy, like their colleagues in the Moroccan Southern provinces, of their full legitimate rights, their dignity and freedom of expression and movement. She has, besides, deplored the fact that this part of the Sahrawi population is deprived even of the rights recognized to refugees at the international level.  Not counted during the census, these women do not benefit even from the aid of UN  bodies and agencies being active in this field.

A human rights militant and active member of the Union of Feminine Action,Hajbouha Zoubeir has, nevertheless, shown her satisfaction about the vested interests of women in Morocco and particularly in the Southern provinces. In this region of the Kingdom, has she specified, woman is being present in the different sectors of the active life, at the political, economic, social and cultural levels.
The participant has also pointed out that the Southern provinces have recorded the most higher  percentage of young girls  in full-time education.
For the AMFED President, the situation in Tindouf camps, where a higher percentage of infant mortality and women precarious life conditions are indicated, should be a questionable issue for the international community. Finally, she has made a call so that these women can, at least, have the possibility to leave freely these camps and live in the country of their choice.