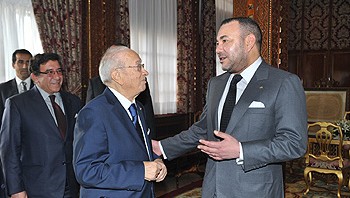 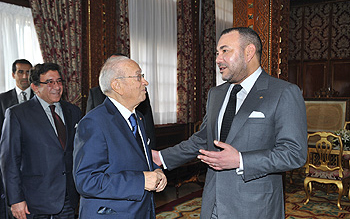 The after Ben Ali Tunisia is convinced that the project of the Arab Maghreb Union (UMA) remains dependent on the settlement of the Western Sahara conflict. The question has been tackled on Wednesday, in Rabat, by the King Mohammed VI and the new Tunisian Prime Minister, Béji Caid Essebsi in his first official visit to a foreign country since his appointment at the head of the government.
The Western Sahara issue « constitutes a constraint to the Maghreb integration », has stated Essebsi during the Royal audience, maintaining that it is important to find a political and final solution to this issue in conformity with the international legality”.
The process of regrouping the Arab Maghreb Union (UMA), suspended since many years because of the Western Sahara conflict, was one of the main subjects that the King of Morocco has discussed with Béji Caid Essebsi.
Since its establishment in 1989, by the Marrakech Treaty, UMA regrouping besides Morocco, Algeria, Tunisia, Libya and Mauritania, finds difficulties in imposing itself as a regional group because of the difference in points of view between Morocco and Algeria directly concerned y the Western Sahara conflict.

In the name of ideological ideals going back to the time of the cold war, Algiers authorities continue sticking to the principle of peoples’ self-determination, encouraging this way the separatists’ ambitions to create a puppet entity taking refuge in the Algerian territory and being financed with the money of the Algerian taxpayers.
On the Moroccan side, the King has reaffirmed again, according to the Royal Cabinet Office release, the necessity to reinforce the founding of the Maghreb Union as a necessary strategic choice, and a mechanism for cooperation and solidarity between the five States of the Union, in conformity with the spirit and the letter of Marrakech founding treaty (..) and the real yearnings of the peoples in the region.
The last « progress » achieved in the Tunisian situation and in certain Arab countries, namely Libya, were also among the points discussed between the Moroccan King and the Chief of the Tunisian Government. The two senior officials have shown clearly their concern about the situation, facing the increasing violent incidents and fighting in this sister country (Libya), and their consequences on the stability and security in the region”.