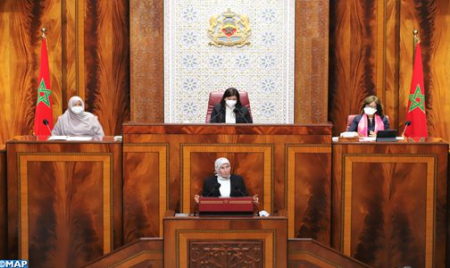 Minister Delegate in charge of Moroccans abroad, Nezha El Ouafi, underlined, Monday in Rabat, the important role of an efficient parallel diplomacy to defend the national cause, through the mobilization of all national skills to sensitize to the legitimacy of the first cause of Moroccans. Highlighting the achievements made by the Kingdom under the enlightened leadership of HM King Mohammed VI, and the dynamics of Moroccan diplomacy, El Ouafi, who was speaking at the House of Representatives (lower house), called for a full mobilization of all active forces to defend the first national cause”. In this regard, she commended the considerable efforts made in this context notably by MPs, political parties and the civil society. The ministry of Foreign Affairs, African Cooperation and Moroccans abroad as well as the embassies and consulates of the Kingdom remain mobilized to support and make available to all MPs and stakeholders all the information necessary to defend the country’s national cause and face the baseless allegations of the “polisario” and Algeria, El Ouafi pointed out. “The ministry is working on the development of a strategy aiming at the accompaniment and the support of all the stakeholders”, said the official, noting that her department is working to develop an action plan for the accompaniment of all stakeholders in parallel diplomacy as well as to guide and supervise them at the various international activities whether they are organized in Morocco or elsewhere. El Ouafi stressed, in this context, that political parties are called upon to mobilize their youth as vital energy and added value to report, counter and denounce all the baseless allegations conveyed by the propaganda channels of the separatists of the “Polisario” . She also referred to the meeting of the Security Council held on April 21, noting that the members of the Council welcomed, during their semi-annual meeting of consultations on the Moroccan Sahara organized behind closed doors, the cooperation of Morocco with the Minurso, as well as the vaccination of members of this mission as part of the national COVID-19 vaccination campaign. They also underlined the imperative and the urgency of the appointment of a new Personal Envoy, a post for which Algeria and the Polisario recently rejected the proposals of the Secretary General to appoint the former Romanian Prime Minister, Mr. Petre Roman, and subsequently the former Minister of Foreign Affairs of Portugal, Mr. Luis Amado, she said, noting that the Security Council did not issue any press release following this meeting which took place in a serene atmosphere.