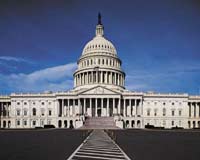 No less than 170 US representative have addressed a letter to President Georges W. Bush urging him to grant support to the Moroccan autonomy plan. The plan grants substantial autonomy to the residents of the Southern Provinces, in a bid to solve the 30-year-old dispute over this former Spanish territory that was ceded to Morocco in 1975 under the Madrid Accords.
The polisario, an Algerian-backed separatist movement, claims the independence of this territory.
Describing it as a "breakthrough initiative to resolve the problem once for all," the congressmen, both Democrats and Republicans, said the Moroccan initiative is "balanced and proposes profound autonomy for the people of Western Sahara".
In their letter to the U.S president, the congressmen deemed that" this type of autonomy arrangement has been an effective means of resolving other separatists claims."

This historic initiative grants profound local autonomy to the" western Sahara while recognizing morocco's territorial integrity," the letter said, insisting that "this compromise is a breakthrough opportunity to find an enduring political solution, and U.S. support is critical to its successful implementation."
Dubbed" Moroccan initiative for negotiation towards an autonomy statute for the Sahara region," morocco's initiative is being discussed by the U.N. Security Council which will meet on Monday to adopt a resolution on the Sahara issue.
"The new Moroccan proposal provides a realistic framework for a negotiated solution, which is the best was to ensure a lasting peace for all parties," the lawmakers said in their letter to President Bush.
After underling that the United States has a major national security interest in the stability and economic prosperity of North Africa, "with Al Qaeda and other terrorist groups expanding their presence into North Africa," the lawmakers voiced concern that "the failure to resolve this conflict of more than 30 years poses a danger to U.S. and regional security, while simultaneously preventing the economic integration of the Arab Maghreb Union." Known by its French acronym U.M.A. the North African regional grouping (mustering Morocco, Algeria, Tunisia, Libya and Mauritania) is facing  stalemate due to the Sahara dispute. Algeria, although providing political, diplomatic, logistic, financial, and military support to the Polisario separatists, has always denied any involvement in this dispute. However, as UN Secretary-General's Personal Envoy for Sahara, Peter van Walsum, recently put it, Algeria plays "a preeminent and dominant role" in the Sahara issue.
In their letter to President Bush, the lawmakers emphasized that the Moroccan autonomy proposal constitutes an « historic opportunity » for the United States to help end this problem and provide a better future for the entire region.”
“We urge you to embrace this promising Moroccan initiative so that it receives the consideration necessary to achieve international acceptance," the letter concluded.
Among the signatories of the letter are: Steny Hoyer, leader of the Democrats and John Boehner, leader of the Republicans.