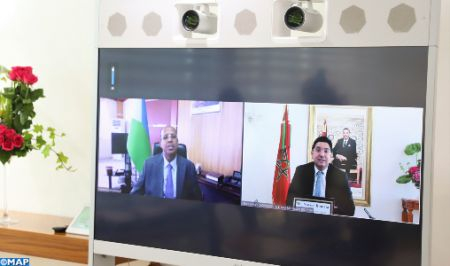 Djibouti has reiterated its “strong and constant” commitment to the territorial integrity of Morocco, while renewing its firm support for a negotiated, consensual and final political solution to the Moroccan Sahara issue and insisting on the exclusivity of the United Nations for the settlement of this dispute. “Djibouti renewed its firm support for a negotiated, consensual and final political solution, and insisted on the exclusivity of the United Nations in the settlement of this dispute, which guarantees the autonomy project of the Moroccan southern provinces, within the framework of the sovereignty of the Kingdom of Morocco, its national unity and its territorial integrity,” said a joint statement issued after a meeting Tuesday by video conference between minister of Foreign Affairs, African Cooperation and Moroccan Expatriates, Nasser Bourita and Djibouti minister of Foreign Affairs and International Cooperation, Mahmoud Ali Youssouf. In this context, “Morocco welcomes the constant position of Djibouti, which has always supported the territorial integrity of Morocco, as well as the opening by this brotherly country of its Consulate General in Dakhla, in February 2020,” added the same source. During this meeting, which is part of the ties of friendship and brotherhood that unite the Kingdom of Morocco and the Republic of Djibouti and the willingness of both countries to further strengthen their cooperation relations, the two ministers commended the excellent bonds of friendship and solidarity between the two brotherly countries and praised the quality of feelings of esteem and respect that characterize the relationship between their Heads of State, His Majesty King Mohammed VI and His Excellency Ismail Omar Guelleh, President of the Republic of Djibouti. The two ministers welcomed the results of the presidential elections held in the Republic of Djibouti on April 9, 2021, which took place in a calm and transparent manner and which confirmed the victory of H.E. Ismail Omar Guelleh, President of the Republic for a 5-year term. Regarding bilateral cooperation, the two sides reaffirmed their commitment to make every effort to further strengthen their relations, intensify and diversify their cooperation in all areas. The two ministers also agreed to further develop an ambitious South-South cooperation through a partnership involving areas such as training, investment, renewable energy, fisheries and seafood processing, tourism, Islamic affairs, civil protection, port cooperation, airport transport and justice. This partnership should also rely on the exchange of experiences and a more proactive policy of businessmen of both countries, said the statement. On this occasion, Bourita and Ali Youssouf signed a framework agreement of cooperation providing for the establishment of a Great Joint Commission that defines the directions to be given to bilateral relations between the two countries in the areas mentioned above. They also signed a Memorandum of Understanding on cooperation between the Ministries of Foreign Affairs of the two countries in the field of diplomatic training, to promote the exchange of experiences in this area. The two parties agreed to hold in Rabat, once the health situation allows it, the first session of the Moroccan-Djiboutian Joint Cooperation Commission, on a date to be mutually agreed upon through diplomatic channels, the statement concluded.