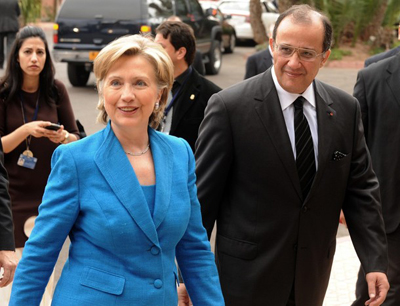 The propaganda and impostures, the dreadful arms that the Polisario separatists and their Algerian mentors use, do not pay any more. The schemes in vogue at that time of cold war are no more supported apart from the Algerian media and authorities, in the name of the somehow revolutionary principle “of the peoples’ right to self-determination”. In less than one week, the separatist movement leadership has received two successive slaps, one from the United States and the other from Colombia.
Through the voice of its chief of diplomacy, the United States, one of the countries supposed to be friend with the Western Sahara, has confirmed on Wednesday 23rd March, their full support to the Moroccan autonomy plan as a final solution for the Sahara conflict.
“We believe that the Moroccan autonomy plan is serious, realist and credible », has reaffirmed Hillary Clinton, renewing also the support of her country to the UN emissary in the region, Christopher Ross leading the negotiations that would lead to the settlement of this old conflict which has lasted for more than 36 years.
The Polisario separatists  and their Algerian mentors would be simply deeply offended by another hard  shock coming from the Latin America. The foreign Affairs Colombian M
inister has reiterated the fact that Colombia keeps, since 2001, its position towards the Sahara issue, that is to freeze the recognition of the ghostly  Sahrawi republic “SADR”.

In a letter sent recently to the Presidency of the House of Representatives, the Vice-Minister in charge of multilateral affairs, Patti Londono Jaramillo has thus put an end to a vain attempt of a Colombian member of the Parliament in favour of the Polisario separatists. Navas Talero, the deputy of the left coalition “Polo Democratico Alternativo” regrouping among others, old leaders of the former guerrilla  of “the movement of 19th April” (M-19 demobilized in 1990), wanted to confirm, at the Parliament, the decision concerning the celebration of the 26th anniversary of the so-called bilateral relations between Colombia and the so called “SADR”. But, it’s a waste of time, the Colombian diplomacy has simply made this project fall. Such a project behind which was, of course, the lobbying of the Algerian chancery. It is high time for the Algerian regime to become aware that the cold war is  over and that the future of the Moroccan and Algerian peoples resides in the Maghreb integration and non in the balkanization.