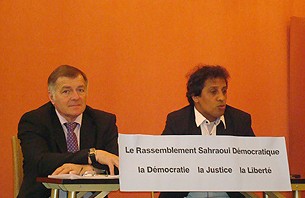 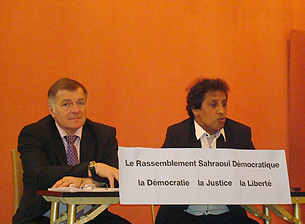 The Polisario leadership which has predominated alone for more than 35 years in Tindouf camps, has nothing more to give. It is the feeling predominating the Sahrawi populations among which thousands of young people confronted to unemployment and idleness, have started asking, through demonstrations in the streets, for deep changes. One of these young peoples, Salah Khatri, an associative participant from Tindouf camps, settled down in the North of France, has just announced the creation of a political party as an alternative to the unique representation embodied for a long time by the Polisario. The new organization called the Democratic Sahrawi Union (RSD), proposes to Sahrawis, according to Salah Khatri, the spokesman and co-founder of the party « a future based on democracy, justice and freedom ». This organization, has he stated, wants to put an end definitely to the “tyrannical” practices of the Polisario proclaiming itself as the unique representative of the Sahrawi populations. The RSD is also favourable to “a political solution based on a consensus” for the Sahara issue “which takes into consideration the interests of the Maghreb region”, has explained Khatri during a press conference held on Friday, in Paris.

Created by desperate young people face to « Polisario failure to get out of the deadlock » and the « loss of hope and the absence of democracy », the RSD intends, according to its founders, to be a « democratic » alternative to the Polisario.
The RSD which coming into existence was encouraged by the wave of freedom and democracy invading the Arab world, says to be for a solution to the Western Sahara conflict which would “pass through the democratic way”.
After having trusted the Polisario for more than 35 years, has explained the spokesman of the RSD, « today, we think he does not represent us » and he is even « becoming a problem for the Sahrawis”.
The Sahrawi populations blame namely the separatist front leadership for being blindly giving its allegiance to the Algerian generals and “seems the more and more to be an element of national and international disorder, making, wherever it is, a deep ultra-conservatism”.
The RSD regroups Sahrawis from all horizons and claims responsibility for committees acting in discretion in all Lahmada camps and the supporters in Europe, Mauritania and even in Morocco. Tormented with deep internal discord, the Polisario becomes the more and more weak, according to observers, by an increasing number of senior executives’ defection, the mass escape of Sahrawis towards Morocco and the retreats of many countries’ recognition of the ghostly SADR.