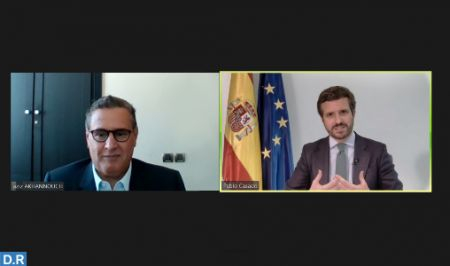 The President of the National Rally of Independents (RNI) Aziz Akhannouch, expressed Tuesday, “the disappointment and incomprehension of Moroccans” concerning the hosting by Spain of the so-called Brahim Ghali, which undermined the climate of trust between Rabat and Madrid. During a meeting held via videoconference with the President of the Partido Popular (PP) Pablo Casado, Akhannouch said that the history of partnership between Morocco and Spain, marked by closeness and strategic collaboration, requires today from all stakeholders and Spanish driving forces to work together to preserve the two nations’ achievements. For his part, Casado pointed out to the registration of five parliamentary questions to request explanations from the government about the “irregular, undisclosed and under a false identity the entry” of the leader of the polisario Front, Brahim Ghali, the RNI, which is a partner member of the European People’s Party (PPE) said in a statement. The meeting aims to engage in an open and frank discussion about the latest actions taken by Madrid, related to the presence on the Spanish territory of the so-called Brahim Ghali, it added.