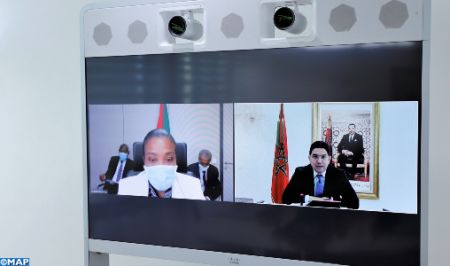 The Republic of Sao Tome and Principe reiterated, Tuesday, its support for the Moroccanness of the Sahara and the efforts made to find a lasting solution to this dispute, within the framework of the Kingdom’s sovereignty and under the exclusive auspices of the United Nations. This reaffirmation was announced by Minister of Foreign Affairs, Cooperation and Communities of the Democratic Republic of Sao Tome and Principe, Edite Ramos Da Costa Ten Jua, during a meeting by video conference with Minister of Foreign Affairs, African Cooperation and Moroccans Abroad, Nasser Bourita. On this basis, the Santomean official committed to work with the Moroccan side for the respect of norms and procedures within the bodies of the African Union, while reaffirming the relevance of Decision 693 of the Summit of Heads of State and Government of the African Union of July 2018, which enshrined the exclusivity of the UN as the framework for the search for a solution to the regional conflict over the Moroccan Sahara, said a statement by the Ministry of Foreign Affairs, African Cooperation and Moroccans Abroad. This meeting was also an opportunity for the two ministers to reaffirm their commitment to strengthening relations of solidarity and political consultation between the two brotherly countries, based on respect and defense of the sovereignty and unity of African States. The two ministers also stressed the importance of strengthening communication and coordination in the various multilateral platforms and to support, in a concerted and mutual way, the Moroccan and Santomean candidacies at the level of regional and international forums, the statement added. In this regard, the Santomean Minister expressed the support of his country to the candidacy of Morocco for the post of Commissioner of the African Union Commission in the fields of education, science, technology and innovation. Commending this support, Bourita also thanked the Santomean party for its support to Morocco’s bid at the United Nations Human Rights Council (UNHRC) for the period 2023-2025. In addition, the two ministers welcomed the deep and dense ties of solidarity between the two countries, boosted by the recent signing of a roadmap of Moroccan-Santomean cooperation for the period 2020-2022, according to the same source. These ties were further strengthened with the opening by Sao Tome and Principe of a resident Embassy in Rabat, which will be inaugurated soon by the two ministers, at a date to be determined by mutual agreement. Both parties also called for the establishment of a Morocco-Sao Tome and Principe Business Council in order to give the necessary impetus to bilateral trade and take advantage of the respective economic potentialities of both countries. They underlined the important role played by the private sector in the promotion of the Moroccan-Santomean cooperation, notably in the sectors of development judged priority by Sao Tome and Principe, including tourism, finance, infrastructures, health, agriculture and fisheries.