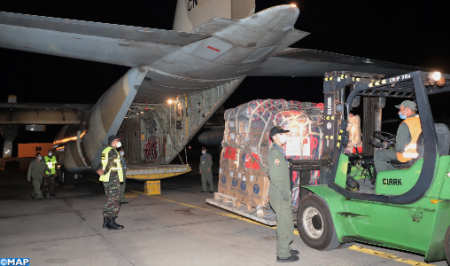 The emergency humanitarian aid sent to the Palestinians, under High Instructions of HM King Mohammed VI, Chairman of the Al Quds Committee, is undoubtedly part of the continued support of the Kingdom of Morocco to the Palestinian cause, said the Director of the daily Al Ittihad Al Ichtiraki, Abdelhamid Jmahri. Morocco has provided tangible support to the Palestinian people by sending humanitarian aids to the Palestinians, under High Instructions of HM the King, reiterating its categorical rejection of all violations and unilateral measures that affect the legal status of Al Quds and legitimate rights of the Palestinian people to fulfill their aspiration for freedom and independence, noted Jmahri, who was a guest of “Ma Waraa Al Hadath” TV program, broadcast on Medi 1 TV. Since the establishment of Al Quds Committee and Bayt Mal Al Quds Agency, Morocco has provided a large part of the agency’s support (nearly 70%), aimed at preserving the Holy City of AlQuds and confronting attempts to change its legal status, he added. He also highlighted Morocco’s efforts and its unwavering commitment to protecting the Holy City, recalling Morocco actions within the Arab League as a member of the Arab Ministerial Committee, to put an end to the illegal Israeli policies in occupied Al-Quds. HM King Mohammed VI, Chairman of the Al-Quds Committee, had given his High Instructions to send emergency humanitarian aid for the benefit of the Palestinian population in the West Bank and Gaza Strip. According to a statement from the Ministry of Foreign Affairs, African Cooperation, and Moroccans Abroad, this humanitarian aid, consisting of 40 tons, is made up of basic foodstuffs, emergency medicines, and blankets.