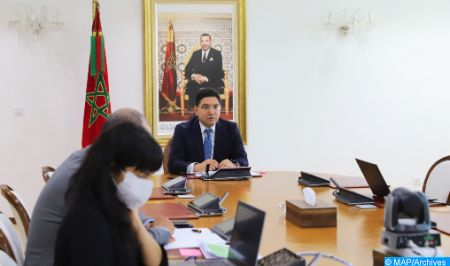 Minister of Foreign Affairs, African Cooperation and Moroccans Abroad, Nasser Bourita, held talks, Tuesday via video conference, with Minister of Foreign Affairs and Foreign Trade of Jamaica, Kamina Johnson Smith. The two ministers reviewed the various aspects of bilateral relations which have experienced a positive dynamic since 2016 and affirmed their common will to further boost them within the framework of a solidarity-based and effective South-South cooperation, as advocated by His Majesty King Mohammed VI, the Ministry of Foreign Affairs, African Cooperation and Moroccans Abroad said Wednesday in a statement. In this regard, both sides welcomed the progress made since the signing in 2019 of the roadmap 2020-2022, while stressing the need to consolidate these achievements and enhance sectoral cooperation, especially in the fields of tourism and agriculture. The two ministers considered that the opening of embassies in Rabat and Kingston would open new horizons and raise bilateral relations to a higher level, the statement said. For her part, Johnson Smith took the opportunity to congratulate Morocco for its management of the Covid-19 pandemic and for the success of its vaccination campaign launched on Royal High Instructions. Regarding the national issue, the Jamaican minister reiterated the support of his country to the efforts of the UN Secretary General and the political process underway to achieve a lasting solution to the Moroccan Sahara issue. She also praised the serious and credible efforts of the Kingdom of Morocco to find a political and realistic solution to this regional dispute. Bourita and Johnson Smith agreed on the importance of consulting and coordinating on issues of common interest in international forums. To this end, the Jamaican minister expressed her intention to give the highest consideration to the candidacies presented by Morocco in the framework of the United Nations system. This meeting was an opportunity for Johnson Smith to renew her invitation to Bourita to make an official visit to Jamaica.