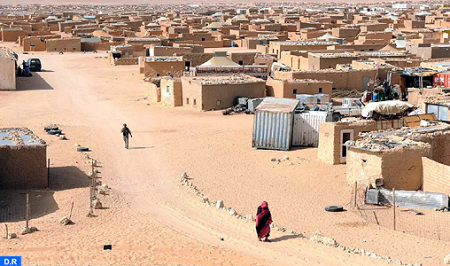 The Tindouf camps controlled by polisario militias, in Algerian territory, are not only a threat to the stability of the Sahel-Saharan region, but also to Europe as a whole, warned Italian academics, lawyers and journalists at a virtual seminar organized at the initiative of the Italian political group “Values and Civil Commitment”. “The Tindouf camps, run by the armed militias of the polisario who are in collusion with jihadist organizations, constitute a threat to the stability of the entire region,” stressed the participants in this virtual seminar recently held from Rome and moderated by the jurist Gabriel Mazzanti, under the theme “The absurd controversy around the Moroccanness of the Sahara”, noting that the very high rate of poverty, the deprivation of freedom and fundamental rights, and the despair prevailing among young people living in the camps of Tindouf, make them easy prey for recruitment by terrorist groups operating in the Sahel region. “The overlapping activities of criminal, terrorist and separatist organizations constitute serious threats, directly affecting the security of the region and Europe as a whole,” said Federico Prizzi, anthropologist at the University Punt-Institute Addoun, in a speech under the theme “Morocco in the forefront of international cooperation in the fight against terrorism”. For his part, Marco Bertolini, former commander in the Italian army, noted in a speech entitled “Geostrategic analysis of the Mediterranean basin” that the Sahel is an unstable area where many illegal activities such as drug trafficking and human trafficking are endemic. The Italian university professor and journalist Alessio Postiglione highlighted the collusion between terrorist groups and the polisario front, as evidenced by the kidnapping of an Italian tourist in southern Algeria by armed gangs, including members of the polisario, a case that was raised in his book “Mafia groups and jihadists”. Corrado Corradi, chairman of the board of directors of the Italian school E. Mattei in Casablanca noted, meanwhile, that history confirms that the Sahara has always been under Moroccan sovereignty. In a speech on the theme “The history of Morocco and the Sahara issue, according to the French historian Bernard Lugan”, he noted that the links between Morocco and its “Saharan provinces” date back to the time of the Almoravids (eleventh century), stressing that many studies of international experts confirm this historical reality. For his part, the national coordinator of the Network of Moroccan community associations in Italy, Yassine Belkassem, said that Algeria is the only country in the world that harbors on its soil an armed group to which it delegates its sovereign powers to commit the most heinous crimes against the populations held against their will in the most isolated camps in the world, adding that these crimes relate mainly to murders, kidnappings, misappropriation of international humanitarian aid, as well as the military enlistment of children and their exploitation for propaganda. Dario Rollo, member of the municipal Council of the Italian region of Cascina, recalled the highlights of his visit to the Moroccan Sahara, noting that this visit allowed him to see the boom that the southern provinces are experiencing in all areas through the development model announced by HM King Mohammed VI, as well as the climate of security and stability enjoyed by the Moroccan Sahara.