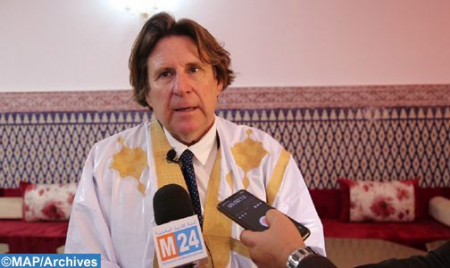 Spanish political scientist Pedro Ignacio Altamirano has slammed the death threats made against him by the Polisario due to his anti-separatist ideas, claiming that they show a “totalitarian and terrorist spirit”. “I received death threats during one of my last visits to the southern Moroccan provinces (Laayoune and Dakhla) to meet Sahrawi social and economic stakeholders, who, apparently, greatly disturb the leaders of the Polisario,” Altamirano pointed out in an interview with news website “Le360.ma”. These threats, he said, show “the totalitarian and terrorist spirit of the Polisario which responds to peace initiatives with death threats”. Ignacio Altamirano, who is the spokesperson for the “International Group to Support Sahrawi Reunification”, stressed that he lodged a complaint after receiving death threats from members of the “Polisario terrorist gang”. Given the seriousness of the facts, the court brought his complaint to the National Court of Madrid. “We will therefore appear as plaintiffs against Brahim Ghali and we intend to require for the maximum possible sentences for crimes against humanity,” he added. Altamirano explained “the shameful silence of Spanish NGOs” on the case of the so-called Brahim Ghali by “economic interests”, explaining that several NGOs which defend the Polisario live exclusively on government aid intended for abroad. Altamirano pointed out that the future of the Sahrawis lies within unified Morocco, noting that it is time to put an end to separatism once for all. According to him, more than 90% of Sahrawis live in peace and prosperity in the southern provinces of the Kingdom. “Moreover, during my last visit to Dakhla, I was able to meet all the tribal chiefs of this municipality, and the request they made to me, as a spokesperson for the International Group for the support of Saharawi reunification, was the opening of a humanitarian corridor, so that all Sahrawis who wish to return to their lands can return to their homes and enjoy prosperity and broad autonomy in Morocco,” he said.