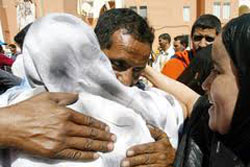 A new operation of family exchanging visits between the Moroccan provinces in the South and Tindouf camps, at the Souh of Algeria, took place on Friday 29 April. It concerns the 15th travel of its kind for the year 2011. It happens two days after the adoption, by the UN Security Council, of the 1979 resolution, extending the MINURSO mandate in the Western Sahara.
These operations are led by the HCR. The present exchange of visits from and towards the Moroccan province of Smara has concerned 59 beneficiaries belonging to 10 families, has indicated a release of the Moroccan office in charge of coordination with the MINURSO.
It concerns six families with a total of 24 persons from the Smara province who have taken off on Friday at 9.30, in an UN plane, at the airport of this city, towards Tindouf. Four families, with a total of 35 persons, have taken off in the same plane, four hours later, coming from Tindouf camps.

Through this exchange, the total number of persons benefiting from family visits since March 2004, has reached some 11.001 among whom 5316 Sahrawis from the Moroccan Southern provinces and 5.685 others coming from Tindouf camps.
Till this date, the exchanging visits operation occurring between the Sahrawi families from both sides, are achieved only by plane. The practical modalities to organize such travels by road transport are still under consideration. The technical aspects of this humanitarian programme have been examined on the 9 and 10th February 2011, in Geneva, during a meeting of the HCR with the delegations of Morocco, Polisario, Algeria and Mauritania. Since that time, a team from the HCR paid a visit in the end of April to Morocco. The HCR team was intending to assess with the Moroccan authorities and the MINURSO the most appropriate way so as to extend the humanitarian programme of family visits exchange using road transport. The two parties have also explored, on this occasion, the ways and means to improve the humanitarian conditions of the Sahrawi populations in Tindouf camps.