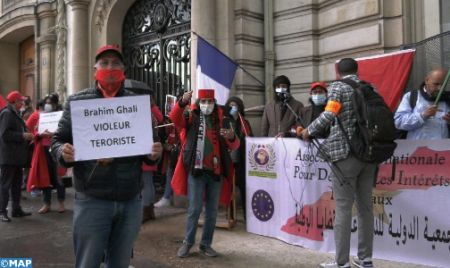 Moroccan associations in France gathered on Saturday at the Place de l’Alma in Paris, close to the headquarters of the Spanish Embassy, to demonstrate their disapproval of Madrid’s decision to host the so-called Brahim Ghali “leader of the polisario” and demand his arrest and his appearance in court to answer for the crimes against humanity that are attributed to him. The sit-in, organized at the initiative of a collective of associations of Moroccans in France, brought together dozens of members of the Moroccan community sensitive to recent developments in the relationship between Rabat and Madrid. Carrying Moroccan flags and banners with messages calling on Spain “to clarify its position vis-à-vis Morocco”, Moroccans in France reiterated their attachment to their country of origin and their mobilization for the defense of the territorial integrity of the Kingdom. They also denounced the attitude of the Spanish government which conspired with the Algerian regime to welcome in secret the so-called Brahim Ghali, yet prosecuted in Spain for crimes against humanity. “The Moroccan civil society in France, present today in Paris, denounces the unacceptable actions of the Spanish government and demands the arrest of the terrorist leader of the polisario militias, Brahim Ghali,” said the organizers in a statement distributed to the media. “The Spanish government has welcomed on its soil the terrorist, Brahim Ghali. Yet this government is the first to be informed of the atrocities and heavy charges against this criminal. The Spanish State justifies its attitude by humanitarian considerations”, deplored the collective. “Being all aware that the human rights of our Sahrawi brothers in the camps of Tindouf are violated, scorned, by the leader of the polisario militia, the Spanish State still shows a premeditated and intolerable attitude,” which undermines relations between the neighboring countries, it denounced. According to the collective, “no humanitarian consideration could question the legitimacy of the victims of rape, torture, kidnapping, arbitrary detention, enlistment of minors but also – it is too often forgotten – slavery or even genocide, committed by this criminal”.