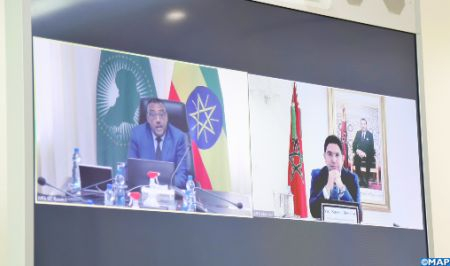 Ethiopia praised Morocco’s serious and credible efforts to find a just, lasting and mutually acceptable political solution to the regional dispute over the Sahara, under the exclusive auspices of the United Nations (UN) and in accordance with the principles and objectives set forth in the UN Charter. During a meeting, which took place Tuesday by video conference, between the Minister of Foreign Affairs, African Cooperation and Moroccans abroad, Nasser Bourita with the Deputy Prime Minister, Minister of Foreign Affairs of the Federal Democratic Republic of Ethiopia, Demeke Mekonnen Hassen, the Ethiopian official underlined his country’s support for the African Union’s Decision 693, adopted at the level of Heads of State during the 31st Summit, officially supporting the UN process in this regard. The two ministers also reviewed during this meeting the progress made in the implementation of extensive and ambitious cooperation agreements between the two countries, said a statement by the Ministry. To this end, said the same source, Bourita and Mekonnen Hassen noted with satisfaction the upward level of bilateral ties, particularly since the visit of His Majesty King Mohammed VI to Addis Ababa in 2016, and agreed to maintain this momentum in priority areas such as education, vocational training, infrastructure, agriculture, renewable energy and decentralized cooperation. Recognizing the enormous untapped potential for bilateral trade, investment and economic cooperation, the two officials reaffirmed their shared commitment to further develop their economic partnership by creating a more favorable environment for mutual investment and encouraging the business communities of both countries to fully explore and take advantage of the opportunities offered by their expanding markets and developing infrastructure. On this occasion, they welcomed the proposed establishment of the Moroccan-Ethiopian Business Council. Mekonnen Hassen also praised the creation of the joint venture between the Ethiopian state and the OCP group which has set up a fertilizer manufacturing plant in Dire Dawa, thanking Morocco for its support in the field of agriculture. This project, the Ethiopian minister stressed, is a perfect example of ambitious and mutually beneficial South-South cooperation. Bourita and Mekonnen Hassen also welcomed the creation of the Coalition for Sustainable Energy Access, jointly led by Morocco and Ethiopia, which promotes universal access to reliable, clean and affordable energy. They also reaffirmed their strong determination to further develop and promote cooperation in renewable energy between the two countries. The two ministers also highlighted the crucial importance of the Morocco-Ethiopia Joint Cooperation Commission as a mechanism to advance the existing partnership and explore new areas of cooperation. They agreed to hold its first session at a mutually convenient date. The two ministers exchanged views on the main regional and multilateral issues of mutual interest, noting the convergence of their views on the points raised. They agreed to coordinate and support each other’s candidacies in regional and international organizations to the extent possible, including Morocco’s bid for the position of non-permanent member of the United Nations Security Council for the period 2028-2029, the chairmanship of the International Civil Service Commission and the post of Commissioner for Education, Science, Technology and Innovation in the African Union, and Ethiopia’s candidacy for the UNIDO. The two sides called for intensifying their interaction and further harmonizing their positions in relevant multilateral institutions, such as the African Union and the United Nations, the statement concluded.