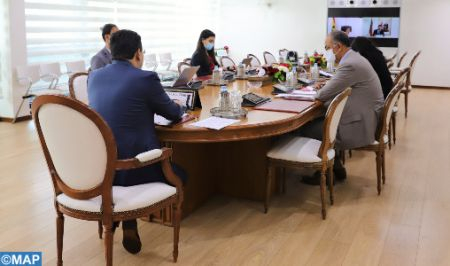 Minister of Foreign Affairs and Regional Integration of the Republic of Ghana, Shirley Ayorkor Botchwey lauded on Tuesday the Kingdom’s efforts to reach a negotiated political solution to the regional dispute over the issue of the Moroccan Sahara. During a meeting via teleconference with Minister of Foreign Affairs, African Cooperation and Moroccans Abroad Nasser Bourita, the Ghanaian top official also reiterated her country’s firm support for the decision 693 of the Summit of Heads of State and Government of the African Union dated July 2018, which established the exclusivity of the United Nations as a consensual framework of the process leading to a political solution that is mutually acceptable, realistic, pragmatic and final to this question. During this meeting, the two ministers welcomed the excellent relations of friendship and solidarity between the two countries which were further consolidated during the visit of HM King Mohammed VI, in February 2017, to Accra and which was crowned by the signing of 25 legal instruments including government agreements and others relating to public-private partnership in different areas of cooperation, said a press release from the Ministry of Foreign Affairs, African Cooperation and Moroccans abroad. Driven by the desire to develop a mutually beneficial economic partnership, the two sides agreed to strengthen cooperation in priority sectors such as agriculture, tourism, health, vocational training and energy and mining. Bourita and Botchwey also discussed reviving the Morocco-Ghana economic council with a view to encouraging the private sectors of the two countries to explore other investment opportunities and to boost public-private partnerships to serve as a model of South-South cooperation in Africa. The two parties welcomed the results of the general elections held in Ghana on December 07, 2020, which took place in a free, transparent climate and in respect of the popular will, enshrining a well-founded Afro-optimism based on the political reforms initiated by President Nana Akufo-Addo. The Minister welcomed the appointment of Ghana to host the headquarters of the General Secretariat of the African Continental Free Trade Area AfCFTA and its recent re-election as President of ECOWAS for a second term. Bourita highlighted the personal commitment of President Akufo-Addo in his capacity as President of ECOWAS for the resolution of the political crisis in Mali. At the multilateral level, the two ministers pledged to ensure better coordination of their actions and to grant each other reciprocal support within regional and international bodies and to promote partnership in matters of peace and security, concluded the press release.