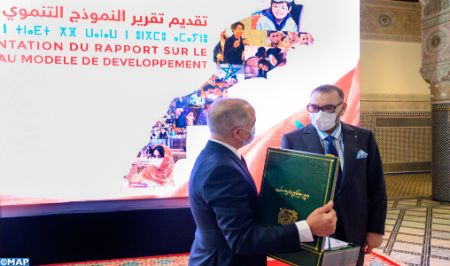 “The proposed model is neither a quick fix for the dysfunctions identified, nor a compendium of sectoral policies, and even less an instructions manual for a governmental or partisan program,” notes the summary of this report which is a response to the mandate that His Majesty the King entrusted to the CSMD.

It is enshrined within the existing constitutional framework, in line with the organization of powers which it defines, and thus brings forth a development vision that seeks to deliver on the promises laid down in the Constitution, the same source stresses.

The model also draws on the Kingdom’s centuries-old history, which has forged the national identity and enriched it with multiple cultural tributaries, and establishes the Moroccan citizen as an autonomous actor who takes charge of his destiny.

This historical depth, which founds the specificities of Morocco as a crossroads of civilizations and land of peace, dialogue and coexistence, also predisposes it to contribute actively to the construction of the new world. A world, shaken by the pandemic of the novel coronavirus (covid-19), whose post-crisis contours are just emerging on the horizon.

According to the document, the development model is designed by Moroccans, with Moroccans and for Moroccans. It is the outcome of a broad and inclusive process of consultation and interaction with citizens and communities across the country, including in the most remote areas.

The way the model has been designed speaks for a novel approach to development, one that is inclusive and based on the active participation of all stakeholders. It shows that the country can lead candid and responsible discussions on its future and identify, through this process, relevant solutions with high relevance to the country’s ground reality.

The consultation process led by the Committee has allowed it to gauge the yearning for participation, inclusion and empowerment, as expressed especially by Morocco’s youth who aspire for more agency and ownership over their destinies.

This process has resulted in the new development model, a proposed path for development, a general call for mobilization and dedication to build, under the enlightened leadership of His Majesty King Mohammed VI, May God Assist Him, the Morocco that we collectively want to see. Its success requires a new form of collective organization allowing all Moroccan men and women, in all their diversity and richness, to work together in pursuit of the same goals, and to live with dignity.

Morocco’s potential for development is tremendous. The nation stands strong and united as His Majesty the King safeguards its higher interests, its stability and its democratic choices. As such, Morocco is able to mobilize its population and all of its energy to take on a collective journey towards achieving a new development ambition.

Leveraging its geography, its history, its unique immaterial capital and the potential of its population, the Kingdom has all it takes to become a pioneer nation and emerging power devoted to the well-being of its citizens. A nation committed to shaping a better world, one that promotes dialogue and cooperation, that safeguards human dignity and preserves nature and biodiversity, according to the CSMD.

On this basis, the ambition set forth by the new development model is one of a Morocco that is thriving and prosperous, skilled, inclusive, and sustainable. The ambition also aspires to a bold Morocco willing and prepared to take on new challenges and opportunities and build leadership in new areas and sectors.

In essence, this ambition requires harnessing the country’s full potential, placing people at the heart and center of priorities, both as actors and beneficiaries of this development process.

This ambition lives up to the burning expectations expressed by citizens that are yearning for participation, empowerment and recognition.

To this end, the CSMD states that it is proposed that this ambition be translated into targeted development objectives, ambitious yet realistic, which would elevate the Kingdom up to the top third of the various global rankings by 2035, and would enable it to further confirm its vocation to be a regional role-model.

These objectives include doubling the GDP per capita by 2035, ensuring that more than 90% of pupils master elementary skills and competencies by the end of primary school, increasing the number of doctors per inhabitant to reach WHO standards, bringing the informal employment rate down to 20%, boosting the participation rate of women from 22% in 2019 up to 45%, and achieving a more than 80% satisfaction rate among citizens with respect to the administration and public services.

This ambition requires full-fledged mobilization of Morocco’s talents, who should be empowered and whose capacities need to be strengthened in order to be geared to tackle the country’s development challenges, especially in a world of increasing complexity and uncertainty, according to the summary available on the CSMD website.