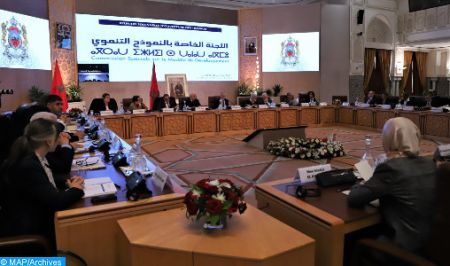 Placed at the center of the development process, the Moroccan citizen is both a fully-fledged player and the ultimate goal. The social, economic and political projects initiated by HM King Mohammed VI, since his accession to the Throne of His Glorious Ancestors, show the particular interest that the Sovereign grants to the human element.  The new development model, the design of which was entrusted by HM the King to the ad-hoc committee for the development model, is in line with this principle insofar as the objective of renewing the development model is to advance Morocco on the path of progress and improve the living conditions of its citizens.  It is expected to compensate for the shortcomings from which the old development model suffered, which had repeatedly revealed its inability to meet the pressing demands and growing needs of citizens, to reduce social inequalities and tackle spatial disparities and to achieve social justice.  As the Sovereign explained in his speech to the Nation on the occasion of the 66th anniversary of the Revolution of the King and the People (August 20, 2019), “the committee’s mission will be threefold: remedial, proactive and forward-looking; the goal is to look to the future with great confidence.”  This committee, which is an advisory body, was called upon to take into consideration the major reforms introduced – as well as those to come – in a number of sectors, such as education, health, agriculture, investment and taxation and is expected to make suggestions on how to improve these reforms and increase their effectiveness, as the Sovereign underlined in the Throne Speech on July 29, 2019.  It was called upon to draw up a report containing the major changes sought and concrete initiatives to adapt the development model, and promote global and inclusive growth, which places the citizen at the heart of this model.  To ensure the adhesion and support of citizens to this new development model, the Committee worked on the basis of a participatory and inclusive approach involving all the driving forces of the Nation, particularly the youth, as an entity of the present and a strength of the future.  In this regard, the Committee and the ministry of National Education, Vocational Training, Higher Education and Scientific Research have launched a wide consultation with high school students on the theme “The Morocco of tomorrow”.  This consultation took place in accordance with the High Royal Guidelines that consider young people as “the real wealth of the country” and according to the provisions of article 33 of the Constitution which insists on the need for the participation of young Moroccans in public life.  The contributions received showed a high level of awareness among the students, and reflected their great love for their homeland, as well as their desire to build a better future that meets the expectations of all Moroccans.  Indeed, the new development model, which will have to reproduce the vision that Moroccans have of their country and the future they seek, will be a new milestone in the process of development of the Kingdom, under the enlightened leadership of His Majesty King Mohammed VI.