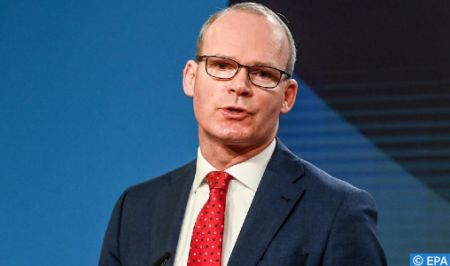 Irish Foreign Minister Simon Coveney said on Tuesday that the Republic of Ireland is looking forward to opening an embassy in Morocco this year to “take advantage of the development of trade with Africa,” reports Irish Radio and TV (RTÉ). The Irish government has committed to opening three new embassies in North and West Africa by 2025, including Rabat this year, RTÉ writes on its website. Speaking on World Africa Day, Coveney said Ireland’s presence on the African continent will grow in the coming years, “as trade and investment develop in both directions”. The Irish Foreign minister also noted that the election of his country to the UN Security Council “has allowed us to deepen our contribution to peace and security in Africa”. According to RTÉ, the minister will present a report to the government this week detailing the first year of implementation of the Republic of Ireland’s strategy for Africa. The report highlights that Ireland’s exports to Africa amounted to €4.85 billion in 2019, representing an increase of 36% compared to 2018.