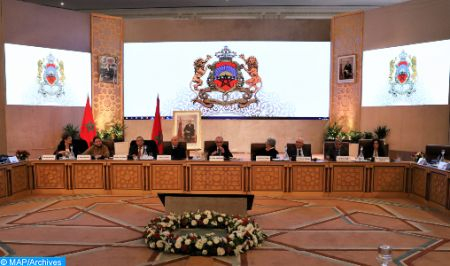 A new development model by Moroccans and for Moroccans, such was the will of His Majesty King Mohammed VI, who underlined in His speech to the Nation on the occasion of the 66th anniversary of the Revolution of the King and the People that “the development model we aspire to is a model that will be one hundred percent Moroccan.” This royal will wants this new development model to be a solid foundation for the emergence of a new social contract with unanimous support, notably of the State and its institutions, that of the nation’s dynamic forces including the private sector, political parties and trade unions, associations, as well as that of all citizens. To this end, the ad-hoc committee for the development model (CSMD) has been working, since December 2019 and in accordance with the High Guidelines of HM the King, to establish, with frankness, audacity and objectivity, an inventory of the achievements of the Kingdom and reforms undertaken, while taking into account the expectations of citizens and the international context as well as its prospects for development. This Committee, which is an advisory body, is also called upon to draw up a report containing the major changes sought and concrete initiatives to adapt the development model, and promote global and inclusive growth, which places the citizen at the heart of this model. The CSMD, which brings together 35 members from various academic and professional backgrounds and with significant knowledge of Moroccan society and political, economic and social, cultural and environmental issues, has undertaken a diligent and methodical work to collect citizens’ expectations and their main development concerns, as well as their proposals for the Morocco they want. Listening sessions were thus held to consult political parties, economic stakeholders, trade unions, the various components of civil society, public administration, universities and specialized international organizations and collect their contributions. During this consultation and listening process, the Committee carried out 70 hearings and listening sessions, 113 workshops, 35 citizen-listening sessions organized in different cities of the Kingdom and visited 30 locations in Morocco. These listening sessions and workshops made it possible to meet and listen directly to nearly 10,000 people. The members of the Committee thus traveled to several regions of the Kingdom to meet citizens and conduct field visits, during which the exchange with the populations enabled them to understand the expectations of stakeholders and citizens. A particular interest was given to the regions, the creation of value in the territories being a major axis of the reflection launched by the Committee. In this regard, several regional meetings were conducted with representatives of the 12 regions of the Kingdom, with the aim of identifying the necessary levers to create regional growth poles and the institutional, economic and financial mechanisms to drive them. The Covid-19 pandemic and the restrictions put in place with regards to the health crisis did not interrupt this expanded process of listening and consultations which continued online and by video conference. Given the repercussions of this health crisis, additional time has been granted by the Sovereign to the Committee in order to allow it to deepen the various aspects of the projected development model and integrate the changes triggered by the Covid-19 pandemic, as well as the lessons to be drawn from it in the medium and long terms and at the national and international level. To sum it up, the participatory and inclusive approach adopted by the CSMD is both a guarantee of the success of the new model and an opportunity for Moroccans to fully embrace the proposed model and collectively seek to ensure its success.