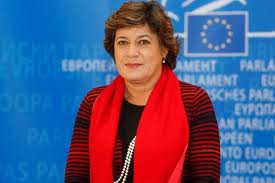 In the absence of sufficient material evidences to accuse the Algerian authority, thanks to the skill of the Algerian military intelligence services, persistent information circulate on the permeability of the long Algero-Libyan frontiers. The Algerian generals seem to be very embarrassed by the possible fall of colonel Mouammar Kadhafi regime, a fall which may have a contagious impact on Algeria. Tackling this question, the Euro-Portuguese socialist deputy Ana Gomes has qualified of “worrying” the Algerian military support to Mouammar Kadhafi regime. Such a support, she has stated, is encouraged by the permeability of the Algerian frontiers allowing the passage of mercenaries and arms in the Libyan territory.
”the support granted to the regime of Kadhafi through the Algerian frontiers is worrying, whether it concerns the sending of mercenaries or combatants », said the worried Ana Gomes in a report which she has the intention to transmit soon to the European Parliament after having visited Libya between the 17th and 20th May.
According to the Euro-Portuguese deputy who fulfils the function of reporter of the European Parliament for Libya, the Libyan population deplores “in its majority the inefficacity” of the African Union which remains, for her, “manipulated by the parties indebted to Kadhafi”.

The Libyan National Council for Transition (CNT) had, many times, denounced the military aid and the logistic support of Algeria and the Polisario to the regime of Kadhafi.
The Euro-deputy has, moreover, underlined that the CNT « enjoys a great legitimacy within the Libyan populations in the liberated zones ».
The opening of the EU bureau in Benghazi, has she continued, deserves to be supported by the European Parliament and « should be a starting point for an increasing cooperation working to reinforce the governance capacities which Libya needs greatly today and in the future”. Remains to know if the Euro-deputy can convince the European Parliament of the well-founded of her report and the conclusions of her small investigation which she has made during her stay in Benghazi, the stronghold of the Libyan rebellion?