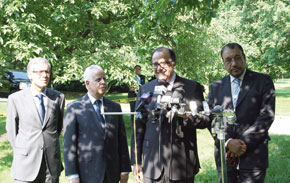 In front of the Algerian authority refusing the census of the Sahrawis sequestrated on its territory in Tindouf camps, the HCR content itself with playing the role of conciliator, as it is the case of other UN instances. As a proof, even in the purely humanitarian case of the former Polisario police executive, Mustapha Salma Ould Sidi Mouloud, forced to stay in exile since more than six months in Nouakchott where he waits to join his family in Tindouf, the HCR could not do anything. In the series of informal negotiations about the Sahara succeeding each other without reaching any concrete result, the UN Security Council has introduced new elements in its last resolution 1979 on the Sahara. During a press conference which took place at the end of the Manhasset 7th negotiations round, the Moroccan Foreign Affairs Minister, Taib Fassi Fihri has referred to the call “addressed by the Security Council to Algeria to allow the census by the HCR of the populations in Tindouf camps, and this in conformity with the international obligations of this country, as a signatory party of the 1951 Convention on refugees”. Such an approach comes among the main claims of Morocco, through which it requires that light be shed on the exact number of the camps population. It would allow also the identification of individual intentions within the context of individual records and interviews and the implementation of the principle of free return to the homeland, Morocco.

In its resolution, the Security Council reproaches to Algeria, as the hosting country of the Sahrawi refugees camps, prevents the HCR and other UN instances from having any access to the camps to accomplish without any difficulty their missions, among which the census operation. The difference between the real population and the one estimated by the Polisario and the Algerians, creates many problems. It makes almost impossible, the adjustment  of humanitarian aid to populations in camps especially to children who are in need of a nutritional adapted diet. In the absence of an HCR permanent presence in the camps, this same difference becomes a source of confusion and lack of transparency, facilitating this way the misappropriation of humanitarian aids which funds may be used in all kinds of traffic.
The first and big victims of these judicial flaws and such unlawful practices are the Sahrawi civil populations and especially the week link in the chain, that is small children, women and old people. While waiting for the end of such a scandal and that Algeria be in conformity with its international obligations, the HCR will continue to be based on the figures manipulated with intelligence and provided to it by the leaders of the Polisario and the Algerian authorities, the first ones to get the maximum benefit from the aids and the seconds to complicate further any settlement of the Western Sahara conflict.