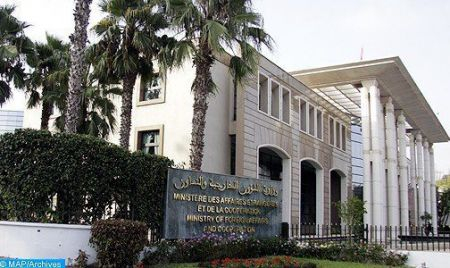 The core issue of the crisis between Morocco and Spain is the hostile Spanish ulterior motives on the Moroccan Sahara, the ministry of Foreign Affairs, African Cooperation and Moroccans Abroad underlines on Monday. The core issue of the problem is a matter of broken trust between partners, the ministry points out in a statement on the crisis between the two countries. “The crisis is not related to a man’s case. It does not start with his arrival nor does it end with his departure. First of all, it is about trust and mutual respect that are broken between Morocco and Spain,” the source underlines, adding that “this is a test for the reliability of the partnership between Morocco and Spain.” If the crisis between Morocco and Spain cannot be ended without the appearance of the so-called Ghali, it cannot be resolved with his hearing alone, the ministry explains, adding that Morocco’s legitimate expectations go beyond that. “They begin with an unambiguous clarification by Spain of its choices, decisions and positions.” For Morocco, the so-called Ghali is just like the “polisario”, the ministry says, noting that the manner in which he entered Spain – with a fake passport, under a usurped Algerian identity and on board an Algerian presidential plane – shows the essence of this separatist militia. “Beyond the case of the so-called Ghali, this issue has exposed the hostile attitudes and harmful strategies of Spain regarding the Moroccan Sahara issue and revealed the collusion of our northern neighbour with the Kingdom’s enemies to undermine the territorial integrity of Morocco,” the ministry goes on. “How in this context can Morocco once again trust Spain? How can we know that Spain will not plot again with the enemies of the Kingdom? Can Morocco really count on Spain not to act behind its back? How to restore confidence after such a serious mistake? What guarantees of reliability does Morocco have to date? In fact, it comes down to asking the basic question: what does Spain really want?”, the source says. In this regard, the ministry notes that this crisis also raises a question of consistency, adding that one cannot fight against separatism at home and encourage it in his  neighbouring country. “It is in the name of this coherence towards itself first and then its partners that Morocco has never instrumentalized separatism. It has never used it as a card in its international relations, and particularly with its neighbours.” In this regard, Morocco’s policy towards Spain has always been crystal clear, the ministry stresses, recalling that during the Catalan crisis, Morocco did not choose neutrality; it was among the very first countries to stand firmly, clearly and strongly, on the side of the territorial integrity and national unity of its northern neighbour. The question is legitimate: what would have been the reaction of Spain if a figure of Spanish separatism had been received at the Royal Moroccan Palace? How would Spain have reacted if this figure had been received publicly and officially by its strategic ally, its important trading partner, and its closest neighbour to the South?, the ministry wonders. “Let’s not have a short memory. In 2012, for example, when there was a visit to Morocco by a Catalan economic delegation, the program had been amended, at the request of the Spanish government, so that this delegation was not received at a high level and so that during all the talks, there is a presence of the representative of the Spanish embassy in Rabat,” the ministry recalls, adding that in 2017, the same consistency was applied when Morocco refused the request for a visit and meeting of a leader of Catalan separatism. “Morocco is entitled to expect no less from Spain. This is the very principle of a genuine partnership,” the ministry points out.