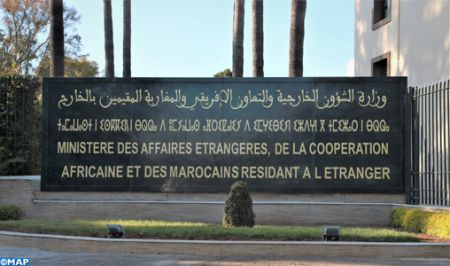 The appearance, Tuesday June 1st, of the so-called Brahim Ghali before the Spanish National High Court, is certainly an “evolution” of which Morocco takes note, it does not, however, constitute the core issue of the serious crisis between the two neighbouring countries, the ministry of Foreign Affairs, African Cooperation and Moroccans Abroad said on Monday. “First, the appearance of the so-called Ghali confirms what Morocco had said from the start: Spain did indeed bring, knowingly, to its territory, in a fraudulent and occult manner, an individual prosecuted by Spanish courts for complaints lodged by victims of Spanish nationality and for acts committed in part on Spanish soil,” the ministry explained in a statement on the crisis between the two countries. This appearance shows the true face of the “polisario” embodied by a leader who has committed heinous crimes, who violates, tortures, flouts human rights and sponsors terrorist acts. It underlines the responsibility of Spain towards itself since the victims of the so-called Ghali are above all Spanish, it pointed out. This appearance, therefore, constitutes the beginning of first recognition of the rights of victims and the criminal and penal responsibility of this individual, it noted, adding that it is also the first time that the Spanish courts have summoned this official, following complaints about serious crimes. “And again, these are only the complaints that came to light. What about all the children, women, and men who endure the horrors of the “Polisario”? Inhuman treatment is inflicted daily on the populations of Tindouf – the voiceless population of the “Polisario” – in the total absence of justice,” the ministry said.