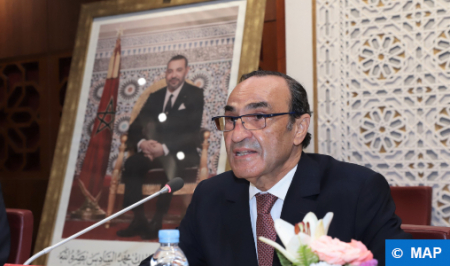 The speaker of the House of Representatives Habib El Malki affirmed the adherence of this legislative institution to the implementation of the new development model (NMD) project, under the insightful leadership of HM King Mohammed VI. In a speech delivered at a meeting held Tuesday at the headquarters of the House and devoted to the presentation by Chakib Benmoussa, President of the Ad-hoc on the Development Model (CSMD), of the general report on the NMD, El Malki considered this report as “a roadmap for a Morocco of tomorrow”, welcoming the results and recommendations of the Committee. During this meeting, co-chaired with Hakim Benchamach, President of the House of Advisors, El Malki noted that the presentation of the conclusions of the general report on the new development model within the parliamentary institution has a strong symbolic dimension, as the parliamentary institution will remain a space for public debate and reflection within the framework of a representative and participatory approach. Quoted in a House press release, El Malki expressed his pride in the content of HM the King’s speech at the opening of the 2017-2018 legislative year, in which the Sovereign affirmed that even though Morocco has made manifest, internationally- recognized progress, the national development model remains incapable of meeting the pressing demands and growing needs of citizens, of reducing categorical and territorial disparities and of achieving justice social. On behalf of all components of the house, El Malki highlighted the conclusions and recommendations laid down in this report, “which has caught the attention of many international bodies”, welcoming the spirit of involvement and the listening approach carried out with all political, union, associative, civil and professional actors, as well as with large categories of citizens with a view to the development of this “strategic” document, concluded the press release.