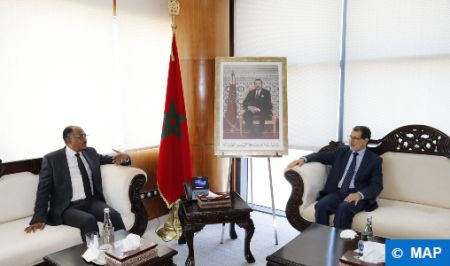 Head of Government Saad Dine El Otmani received, Wednesday in Rabat, the Special Envoy of the African Union (AU) for the African Medicines Agency (AMA) Michel Sidibé, who is on a visit to Morocco as part of the process of ratification by AU member states of the treaty establishing AMA. During this meeting, the African official praised the important advances made by Morocco in the field of public health, the quality of medical facilities and institutions of governance of the health system, which he witnessed during his visit to the Kingdom, as well as the promising horizons of the Moroccan policy in the field of health and the generalization of medical coverage, said a press release from the Department of the Head of Government. Sidibé also highlighted the objectives of AMA, an agency called upon to address the health challenges facing the African continent, particularly in terms of facilitating the population’s access to safe and quality medicines by benefiting from the skills and experiences of the continent in this area, and from the combined efforts of African countries. On this occasion, El Otmani reiterated Morocco’s unwavering readiness to engage in and support African development initiatives, including the initiative to create the AMA, in accordance with the African policy led by the Kingdom under the wise leadership of HM King Mohammed VI, it said. In this regard, the Head of Government recalled the pioneering continental experience of Morocco in the field of the pharmaceutical industry, as well as the important measures taken by the Kingdom as part of the generalization of the health coverage for all citizens, underlining the Kingdom’s willingness to share these experiences with friendly African countries. El Otmani also reviewed Morocco’s efforts to expand its public and private investments in the African continent, and to develop cooperation with the countries of the continent at different levels, the statement concluded.