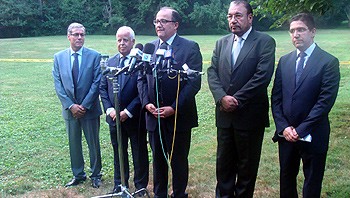 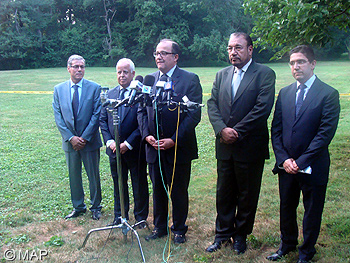 The process of settling the oldest conflict in the African Continent is still in the deadlock. The eight round, the informal negotiations held from 19 to 21st July in Greentree, Long Island, next to New-York, in the presence of the US Secretary general’s personal envoy for the Sahara, Christopher Ross, could not make things progress. The statement is made by Christopher Ross himself, who was obliged, once again, to declare with regret, that “each party has continued rejecting the proposal of the other as a unique base for the coming negotiations”. The chief of the Moroccan delegation, the Minister of Foreign Affairs, Taib Fassi-Fihri sees things from another side stating that the on-going normalization of reports between Morocco and Algeria may strongly “contribute to the resolution” of the Sahara issue. The chief of the Moroccan diplomacy rejoins in this point, the opinion shared by many diplomats and observers based in the region  who have maintained, many times, that the key solution to this conflict is in the Mouradia Palace in Algiers.

Without the help and support of the Algerian authority, they believe, the Polisario front and the ghostly Sahrawi Republic (SADR) would not exist. But as the Algerian regime continues clinging to the ideals and principles going back to the cold war, state the same diplomats and observers, the Western Sahara file continues aggravating the reports in all the region of the Arab Maghreb and making the tensions grow, now and again, between the neighbour countries. During a press conference, Fassi Fihri did not fail to call Algeria to respect the international law through the respect of the humanitarian right in Tindouf camps. “the Moroccan party, has he specified, has reiterated its call to the international community and to Algeria, as the country hosting the refugees on its territory, to apply first of all and before anything else, the international humanitarian right, namely the organisation and registration” of the populations living since decades in these camps, in the Algerian territory. The chief of the Moroccan delegation has even regretted to notice once again that the other parties “enjoy a persisting position”, by denouncing that “the denial by the Polisario of its commitments” namely the examination of the “human rights issue  which he himself has claimed”. This round, has he declared, was also “a new occasion to present the Moroccan autonomy initiative as a whole and to remind of its legitimate aspect such as it was underlined by the UN Security Council”. Strong with the unity of its internal front around the Sahara issue, and the legitimacy and appropriateness of its cause, Morocco, states Fassi Fihri, would not remain folded arms and would continue its way towards development on the socio-economic and cultural levels, but also on the political one. During this round, the parties have continued the “discussions about the new ideas announced by the UN Secretary general in his last report to the Security Council. They have explored, according to Ross, « all the means to make the members respected by a large representative group of the Sahrawi population, participate » in affording support to the on-going negotiation process. They have also started a preliminary discussion on the themes of governance, such as education, environment, health, mine clearance and natural resources. The coming informal negotiations on the Sahara will take place “after autumn session of the UN General assembly”.