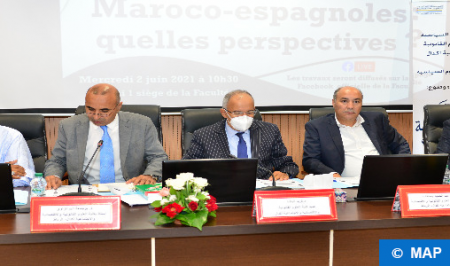 The prospects of Moroccan-Spanish relations were at the heart of a round table held Wednesday in Rabat by academics and experts in political science and international relations. Initiated by the Moroccan association of political sciences in partnership with the Faculty of legal, economic and social sciences of Rabat-Agdal and in collaboration with the public law and political science research laboratory, this meeting was the opportunity to present an academic analysis of the crisis between Morocco and Spain from different perspectives and discuss the prospects of relations between the two countries. The participants underlined that the current crisis between Morocco and Spain is the result of several legal and diplomatic “violations” from the the Spanish side following the secret hosting of the leader of the “polisario”, the so-called Brahim Ghali, with a fake identity, despite being the subject of several complaints related to serious crimes and violations of human rights. Spain’s attitude represents a flagrant violation of the principles of good neighbourliness and the defense of human rights, they said, noting that this crisis will have serious consequences on the Mediterranean region, given that the Spanish plots against Moroccan interests have undermined trust with the Iberian neighbour. According to experts, Madrid’s reaction to the latest developments in the Moroccan Sahara issue accentuates the tension between the two countries, which raises questions about the future of these relations. The future of Moroccan-Spanish relations opens the door to all eventualities, they said, while underlining the need to open a debate on the crisis of the political landscape in Spain. On the sidelines of this meeting, a tribute was paid to the president of the association for advanced regionalization and the autonomy plan in the region of Dakhla-Oued Eddahab, Ahmed Esslay, for his contribution to the efforts made to defend the territorial integrity of the Kingdom.